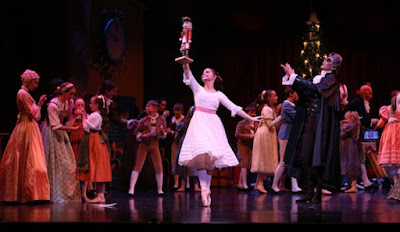 After an absence of twenty-five years, Queensland Ballet returned to the Canberra Theatre last night, with their production of Ben Stevenson’s acclaimed version of “The Nutcracker”. This production was devised by Stevenson for the Houston Ballet in 1987, and has been danced by them, as a Christmas treat, every year since, until it was replaced by a new version by Stanton Welch in 2016.

Queensland Ballet’s Artistic Director, Li Cunxin, danced in this production in 1979, shortly after arriving in Houston from China, at the invitation of Stevenson. He acquired this version for Queensland Ballet four years ago and revived that tradition by presenting it every Christmas since.

The production is visually beautiful, with snowy Christmas card settings by Thomas Boyd. Desmond Heeley’s exquisite costume designs have been carefully reproduced by Queensland Ballet under the supervision of associate costume designer, Noeline Hill, and Stevenson’s elegant, inventive choreography is superbly danced by the company.

The ballet commences with Christmas party guests arriving through the snow to be welcomed by their hosts into a cosy room with a glowing fire and large Christmas tree.  Delightfully detailed vignettes evolve around excited children bickering over presents. The party entertainment is provided by the avuncular Dr. Drosselmeyer (Shane Wuerthner), who presents a special gift of a wooden nutcracker doll to Clara, beautifully danced and charmingly portrayed by Mia Heathcote.

Following the party, Clara is woken from her sleep by giant mice. She kills  the leader with her shoe when suddenly her nutcracker doll transforms into a Prince (Alexander Idaszak) who summons up a sleigh to transport her to the magical Kingdom of the Sweets, where she is welcomed by angelic pastry cooks, the sugar plum fairy (Yanela Pinera), and Mother Ginger (Liam Geck) who secrets children under her voluminous skirts.

A series of gorgeous divertissement follow in which both principals and corps de ballet impressed with the accuracy and attention to detail of their dancing,  whether performing as party guests, snowflakes, toy soldiers, or during the gorgeous Waltz of the Flowers for which they were stylishly led by Teri Crilly and Camilo Ramos.

Particularly memorable among these divertissements were the extraordinarily sinuous Arabian dancers, Lina Kim and Joel Woellner, and the athletic Chinese dancers, D’Arcy Brazier and Zuquan Kou.

Laura Hidalgo was the most regal of Snow Queens, elegantly partnered by Alexander Idaszak as her Prince. Their perfectly executed grand pas de deux, which brings the ballet to its climax, fully deserved the thunderous applause which greeted its climax.

This season of “The Nutcracker”, has provided Canberra audiences with its first opportunity to see Queensland Ballet under the artistic direction of Li Cunxin.  Given the success of the season, for which all performances are completely sold out, it is hoped that it will herald the beginning of regular visits by the Queensland Ballet to the National Capital.

This review first published in the digital edition of CITY NEWS on 24th November 2016
Posted by Canberra Critics Circle at 5:58 PM