THE MERRY WIDOW FROM BLUEGUM CREEK 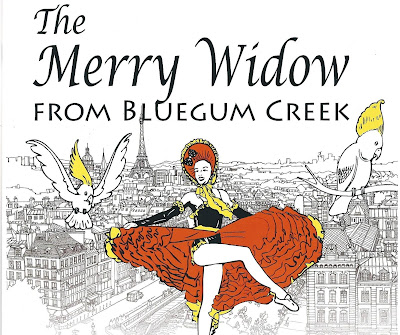 Franz Lehar’s ‘The Merry Widow’ has been an international hit since it first opened in Vienna in 1905 and is frequently revived even though operettas are rarely performed these days.  The story concerns a rich widow and her countrymen trying to keep her money in their principality by finding her the right husband.

In Frank Hatherley’s libretto, the principality becomes Australia and the action occurs in the Australian Embassy in Paris.  The change works very well, creating an opportunity for some fun with Australian dinkum characters.  While the lyrics have been changed to suit the new book, the music score is essentially the same and what a beautiful score it is.

There are some good classical trained cast members who are able to sing the score very well.  Louise Keast sings and acts the Widow very appealingly and Charles Hudson as her intended, Danny Macquarie, also has a fine voice and effortlessly captures the style required for this type of character.  Ken Goodge plays and sings Camille very well and Matt Greenwood as the French translator, Michelin, gives a good comic performance.  Robert Grice is perfect as the ocker Australian Ambassador and Stephanie McAlister is good fun as his wife who flirts with Camille.  The rest of the cast give fine vocal support.

Jennifer Groom’s orchestra took a while to settle down on opening night but then played the score nicely.  Thompson Quan Wing’s simple and practical set design works well and the period costumes by Janetta McRae are fine.  More attention needs to be given to the sound.  There were far too many body mikes not turned on until after the actors began speaking, sound levels were all over the place and lyrics could not be heard clearly.

It was fairly obvious that the choreographer, Belinda Hassall, had to deal with a cast of mostly non-dancers.  The dance that did work fine was ‘The Ladies Of Paree’ number towards the end of the show, which was able to make an amusing feature of the fact that the characters were not really dancers.

Peter Smith’s production appeared to need more rehearsal time.  Many cast members were rather stiff in the delivery of their lines and they were often too slow with their cues.  Their characterizations and the pace of the show suffered accordingly.

The show’s strengths – the music, the funny new book and the fine singing by the principals – manage to outweigh the areas where the production falls short.  The seductive music of ‘The Merry Widow’ is always a joy to hear.

Len Power’s reviews are also broadcast on Artsound FM 92.7 ‘Artcetera’ program on Saturdays from 9.00am.
Posted by Canberra Critics Circle at 12:08 PM