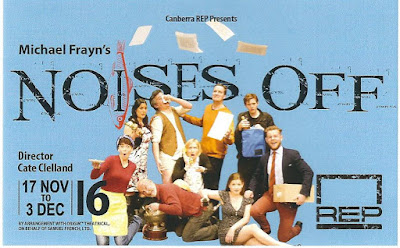 Arguably one of the funniest plays ever written, Michael Frayn’s ‘Noises Off’ was written in 1982 and is revived frequently all over the world.

The play presents three different views of the first act of a poor farce called ‘Nothing On’ - the first onstage in late rehearsal, the second from backstage during a matinee performance and the third from an audience point of view a couple of months into the run of the show.  The humour arises from the deteriorating relationships of the actors and the impact this has on the performance of the play as the season progresses.  Anyone who has ever been involved in working on a play – onstage or backstage – will identify with the situations presented here.

The company of nine performers will be amongst the fittest people in Canberra by the time this season finishes.  The speed at which this play has to be performed, with people running up and down stairs and in and out of doors, is breath-taking.  It’s also a demanding memory test with three differing presentations of the same play-within-a-play script.

Peter Holland as the harried but selfish director gives a nicely judged, temperamental, John Cleese-type performance and Lainie Hart is very funny as the actress, Dotty Otley, and her onstage character, Mrs Clackett.  Her routine at the start of the third act involving a phone and its long cord, newpapers and a plate of sardines is hysterical and brilliantly performed.

Alex McPherson is a delight as the dim-witted actress, Brooke Ashton, and the sexy Vicki onstage and Lewis Meegan, Arran McKenna, Stefanie Lekkas and Andrew Kay all give strong and very amusing performances.  Carla Weijers and Brendan Kelly have some very funny moments as well-meaning backstage crew caught up in the mayhem.

Quentin Mitchell has given them a very attractive and functional set to work on and the lighting design by Bernard Duggan is excellent, especially in the dimly lit second act played from backstage.  Costumes by Kitty McGarry are just right.

This is Cate Clelland’s second direction of the play for Canberra REP and she ensures that the show runs at break-neck speed.  However, when the cast were playing their off-stage selves, they still seemed to be performing too much like their onstage characters.  The play works much better if the difference between onstage and offstage personalities is clearer.

Nevertheless, this is a very entertaining production of a very funny play.  If you’ve never seen it, do yourself a favour and get tickets for this popular show before it sells out.

Len Power’s reviews are also broadcast on Artsound FM 92.7 ‘Artcetera’ program on Saturdays from 9.00am.
Posted by Canberra Critics Circle at 9:11 AM