AN EVENING WITH GROUCHO 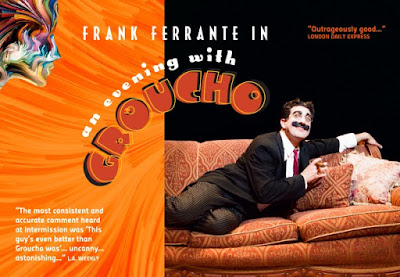 There was a full house at the Q Theatre in Queanbeyan for the opening night of ‘An Evening With Groucho’.  While other more recent movie stars have been forgotten, it seems that interest in the Marx Brothers has never flagged.

Most of us know the Marx Brothers from their movies of the 1930s.  When you watched them as a child, Harpo was the funniest with his silent comedy while Chico was amusing with his crazy Italian accent.  You had to lose your innocence to really appreciate Groucho with his lightning fast line delivery and his often outrageous double entendre.  The Brothers comedy skewered the pretentions of upper class society and accepted manners and behaviours of the time.  Nothing was sacred and, as we still object to being told how to behave and delight in bringing down people who’ve got too big for their boots, their comedy still works today.

According to the program, Frank Ferrante has played Groucho Marx over 2500 times in the USA and internationally.  His portrayal of the character is extraordinary.  Ferrante introduces the show as himself and then we see him applying the trademark greasepaint moustache and eyebrows.  Suddenly he IS Groucho.  For almost two hours it’s hard to believe that you’re not in the actual presence of this legendary star. 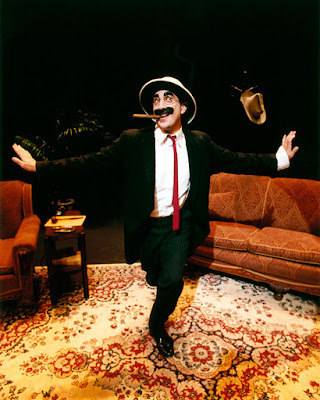 With Adelaide musician, Alex Wignall, on piano, Groucho sings the famous songs from his movies including ‘Hooray for Captain Spaulding’ and ‘Lydia, The Tattooed Lady’.  He relates a lot of the history of the Marx Brothers including the details of his own meeting with Groucho late in his life.

This would have been interesting and entertaining enough but Ferrante takes the show to another level by interacting as Groucho with audience members.  Engaging individual audience members in a conversation with him, Groucho effortlessly runs with the information offered and has the audience in hysterics with his sharp replies.  It’s all done in great fun and you could see that those audience members were enjoying it as much as we did.

Direction of the show by Dreya Webber is tight and visually interesting.  Pianist, Alex Wignall, holds his own against an onslaught of jokes from Groucho and the Q Theatre’s usher, Lesley, had an evening she’ll never forget with Groucho targeting her for romance and coffees.

I was introduced to Frank Ferrante afterwards in the foyer, and when he was told I was reviewing the show, he instantly offered me a handful of money just as you’d expect Groucho to do.  I didn’t take it (he wasn’t serious, of course) but he’s given me an idea…..

Len Power’s reviews are also broadcast on Artsound FM 92.7 ‘Artcetera’ program on Saturdays from 9am.
Posted by Canberra Critics Circle at 11:05 AM