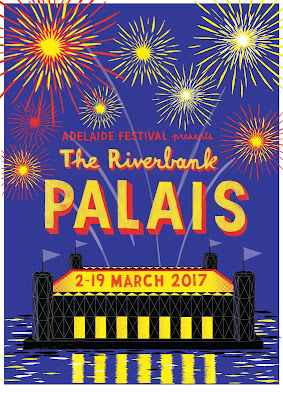 Co-Artistic Director, Rachel Healy flicks through the pages of the 2017 Adelaide Festival Programme. Barrie Kosky’s Glyndebourne Production of Handel’s Saul – exclusive. Thomas Ostermeier’s thrilling Richard lll – exclusive. Neil Armfield’s acclaimed production of Kate Grenville’s The Secret River, adapted by Andrew Bovell and staged in a quarry- exclusive. Rufus Wainwright – exclusive. Concerto Italiano. Radical music from Italy, La Gaia Scienza, Peter the Wolf with Miriam Margoyles. Dance work from Israel, L-E-V and Gala from France. And so the list goes on.
It is the first time that the Adelaide Festival Board has appointed two leading figures of Australian theatre to co-direct this flagship annual event. Adelaide born and educated, Rachel Healy brings a wealth of experience as an administrator and producer to the job. Neil Armfield AO is recognized as Australia’s leading director of theatre, opera and film. Both have worked together at Belvoir Theatre and now they face the huge task of creating a festival programme to appeal to all and maintain a tradition that has presented some of the world’s finest artists across all art forms for the past fifty six years.


“We’ve got a shared vision and its role in society and its importance” Healy tells me. “This job is an opportunity in many ways to take my knowledge from working at Belvoir, the Sydney Opera House, and the City of Sydney, and my thinking into a single pursuit and join Neil in doing that. I have learnt to understand what festivals offer to the psyche of a city and the cultural life of a city.”


“There is a reason that it is seen as one of the top three festivals in the world with Edinburgh and Festival d'Avignon. It’s a small city. It’s a walkable city, and it really can embrace having a festival in March that can dominate in a way that Sydney can’t. Along with the Fringe, all the promises that festivals have to make about vibrancy are delivered in spades.”


In creating their programme for the 2017 Adelaide Festival, Healey and Armfield saw their first festival as being upheld by four pillars: The Riverbank Palais, a recreation of Adelaide’s floating Palais of the 1920s, which will also serve as the Festival Club on the Torrens River; Neil Armfield’s reimagined production of The Secret River in a quarry in the Adelaide Hills; Barrie Kosky’s universally acclaimed production of Handel’s opera Saul, direct from the Glyndebourne Festival, and  a spectacular opening event yet to be announced in January. This conceptual framework has emerged from a sense that the world is festivalising. A festival model allows one to rouse general audience interest and a media buzz. “It’s a much more interesting way of generating broader interest in the work that you are presenting.” Healy says.

Healy and Armfield are determined to present works of a really significant scale that are entirely unique to the Adelaide Festival. They have drawn on the festivals of the past to select works that are absolutely the best of their art form. Armfield and Healey have given the nod to Peter Brook’s past production of The Mahabharata in a  quarry during a previous festival, but Armfield’s restaged production of The Secret River presents one of our own stories with its own primal qualities. It is a story largely untold and disputed.


“The Adelaide Festival has always wanted to try something more risky, more challenging and more spectacular. The Riverbank Palais is an example of a programme that is wildly ambitious. It is such a great story and largely unknown. It celebrates our history but is still very contemporary with a contemporary design and approach. The “Taj Mahal of the Torrens” was once “the most distinctive and beautiful place of entertainment in the Commonwealth” It sank after a series of mysterious explosions and now the Festival will revive the spirit of the glittering floating ballroom along Adelaide’s Elder Park. Food, drink, entertainment and hearty conversation will recall a bygone era of ballroom dancing and elegant nightlife as phoenix-like the floating Palais will become the hub of the Adelaide Festival.


In putting the programme together with Armfield, Healy has been fascinated by the linkages between what different artists on different continents are exploring. “I think that the question of land, and of our connection to land is something that comes up all the time. Obviously in The Secret River it’s a central theme. Also in Gardens Speak by Tania El Khoury, an installation from the United Kingdom and Lebanon, the theme emerges with powerful effect. Ten audience members at a time, clothed in raincoats, are invited to dig into the earth to discover the stories of those murdered during the 2011 uprising by the Assad regime. The dead were not allowed to have public funerals, so they were buried by relatives and friends in back yards. “The macro issue is about what’s happened in Syria," Healy explains, "as well as the personal stories and experiences of how personal space for burial has been found. It’s a fantastic way in which artists can do what artists can do which is not reportage or documentary. You learn something but you are transported through the creative imagination of the artists involved.”


The chamber music series, Chamber Landscapes, curated by Anna Goldsworthy, will focus on a weekend of Schubert in a natural environment. The music of the original roving composer will traverse both inner and outer landscapes, accompanied by an Australian composer, responding to the landscape at the Ukaria Cultural Centre in Mount Barker.


As well as embracing the epic themes of the landscape, the Festival also offers profound personal insights into the human condition. William Yang and Annette Shun Wah explore the contemporary Asian- Australian experience in The Backstories. Wot No Fish from the UK tells a deeply moving and uplifting story of an East End Jew who would draw on people’s wage packets as a way of celebrating their relationship. MDLSX, adapted from Jeffrey Eugenides’ book Middlesex, also uses personal testimony as platinum-maned punk goddess Silvia Calderoni  tells her own story of questioning gender in an empowering hymn to androgyny. These are shows that share the personal stories of the outsider. “They provide powerful links with identity and our own sense of self.” says Healy.


“The thing that excites me most,” Healy adds,” is presenting works that I can say hand on heart you will absolutely not be able to see in any other context and that anyone who is excited about the opportunity truly great works by the greatest artists of our generation are going to be able to see it in Adelaide. For example, Saul is not just Barrie Kosky at the top of his form. According to Neil Armfield, he feels that Kosky is completely breaking open the art form for generations to come. It is so thrilling, so exciting and the musicality is perfect.”


Armfield and Healy have programmed the Festival so that people can optimize their time while in Adelaide. At the first weekend, it is possible to see the very best at night, while catching Betroffenheit, the Canadian Dance work at a five o’clock session and also enjoying Writer’s Week during the day. “It’s a fantastic weekend to be there.” Healy says.