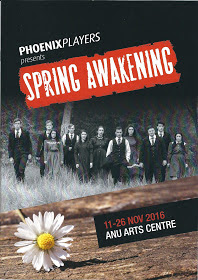 This Phoenix just keeps rising. Following on from an outstanding production of Brian Yorkey and Tom Kitt’s Next To Normal, with its powerful and moving insight into the debilitating effects of mental illness, Phoenix Players excel with a superb production of Spring Awakening –The Musical. Frank Wedekind’s original 1891 play about the turbulent adolescent rites of passage from youth to adulthood may seem an unlikely inspiration for a musical. 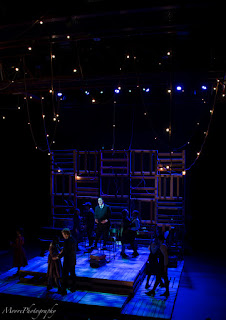 The father of Expressionism and a mentor to the young Bertolt Brecht, Wedekind dared to expose the dark and oppressive character of the morally shackled bourgeois society of Nineteenth Century Germany. He dared to bring to the stage the sexual taboos of his time.   Teenage Wendla (Kaitlin Nihill) continues to be persuaded that children come from the stork with disastrous consequence. Martha (Tegan Braithwaite) reveals the terrible beatings she receives from her father. Ilse ( Kashmira Mohamed Tagor) flees her home to escape abuse. Moritz (Pip Carroll is tormented by parental expectation and the shame of failure. Ernst (Jake Willis) and Hanschen (Lachlan Agett) confront the natural sexual love of two young adolescents.  Under the yoke of adult domination, played to frightening effect by Kelda McManus and David Cannell, the swirling flood of confusion, anxiety and dread envelops the young, drowning them in the terrifying conflict between their natural desires and the stern impositions of an adult  society, corrupted by its own bigotry, fear and prejudice.

Jennie Norberry’s carefully designed costumes for the production place the action clearly in the period. Chris Zuber’s atmospheric and imaginative timber design of platform and scaffold evokes a certain natural austerity, allowing director Kelly Roberts and Grant Pegg to use the space freely and inventively in a sequence of striking images and eruptive movement about the stage. It is atmospherically complemented by Hamish McConchie’s lighting design. Every aspect of production exudes a confident air of professionalism..

Do not be misled. Spring Awakening-the Musical is no ordinary musical. The music, though distinctly American Rock, notes the strident elements of expressionism and the invocation of the inspiration of  the German Expressionist movement, characterized by Kurt Weill and the operatic score of Alban Berg’s Lulu. It is of course vastly different, and, like Wedekind’s other play, Lulu, would lend itself to an operatic treatment, but it is a rock musical that speaks from the inner impulses of the longings and fears of the young characters in this tragic tale. Matt Webster senses the challenge in his musical direction and the band and the actors rise to the challenge.

Nor does Steven Slater and Duncan Sheik’s adaptation of Wedekind’s original, shocking and banned drama offer the conventional happy ending. The play is a bleak portrayal of troubled youth and an autocratic and cruel society. Nature’s innocence and society’s fierce intractability collide with fatal consequence. It is a tragedy of shattered hope, discarded promise and brutal mental and physical oppression.


Prophetic and disturbingly relevant, Spring Awakening-the Musical speaks with the wisdom of Wedekind to the society of today.


Wedekind’s apparent obsession with sex and violence that characterizes many of his plays can also be seen as a llght, shining upon the problems that still persist to this day. It is why this eight time Tony Award winning musical is an important companion to the music theatre canon.  It is neither comfortable, nor frivolous. It will not draw the crowds as do Wicked or My Fair Lady and their ilk.  Nor will it have the appeal of Les Miserable or Miss Saigon. It belongs in the company of Next To Normal, although it is more epic in its character. 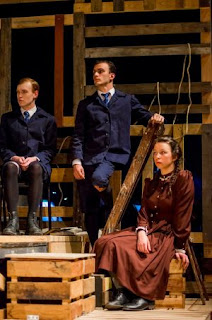 Above all, this is a musical that demands the very best of its cast and crew, and it is why Phoenix’s production is so impressive. The youthful cast, under the sensitive and inventive direction of Roberts and Pegg are outstanding. They are in the moment every moment, intently focused, passionately committed and remarkably assured and professional. It would be easy to single out principals like Nihill as Wendla, Callum Bodman as Melchior or Pip Carroll as Moritz, but that would not do justice to an excellent ensemble. If this cast represents the future of theatre in Canberra, then Spring Awakening – the Musical gives hope for future work of exceptional excellence.

Phoenix Players are making bold and courageous choices by presenting Next To Normal and Spring Awakening-the Musical, and I fear that audiences are not aware of the wonderful work that this company is bringing to Canberra audiences. Seasons are too short for word of mouth to gather momentum and the transitory nature of live performance means that Canberra audiences will miss a production that is without a doubt a shining example of Canberra’s young talent and a dazzling triumph for the ever -rising Phoenix Players.

Posted by Canberra Critics Circle at 11:49 AM