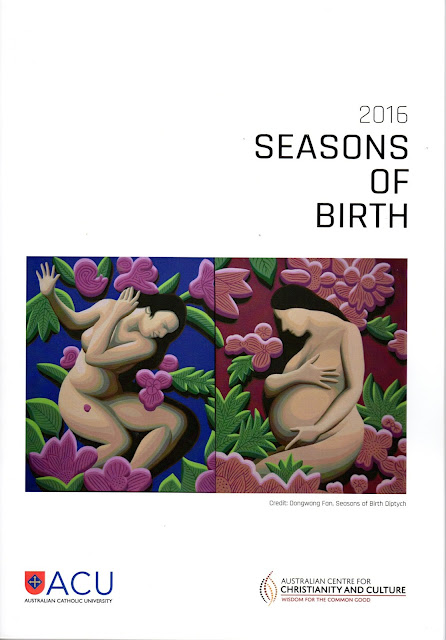 Deborah Kelly:  After After del Sarto from The Miracles  Photomontage (gicleè print in pigment inks on Canson infinity cotton paper)

Jumaadi:  Mother and Child  (chinagraph on hand made paper)

Ella Whateley:  The Giver, the Gift  Painting (acrylic, oil and wax on canvas)

Danica I. J. Knezevic:  within the shadows lie my true reflections  Video

In archaeological studies it is commonly thought that the mark distinguishing modern people homo sapiens sapiens from earlier stages in our evolution is the evidence from about 40,000 years ago of ceremony and art, which is seen as representing magical and religious beliefs.  Figurative art with symbolic significance has been a key feature of Christianity from very early in its history.  This exhibition continues that tradition, but now includes abstract as well as figurative works, not all necessarily falling within strictly conventional Christian theology.

The works are presented within a thematic arrangement, but the purpose is as much about artistic exploration as about telling a standard story.  I found, as an atheist, plenty to interest me about the nature of being born and especially about the central place of women in all our lives, independent of religious or specifically Christian doctrine.

The curators explain in their introduction to the catalogue:  We approached fifteen leading Australian artists who reflect different cultural, different faith and non-faith, different gender and sexual orientation backgrounds, and invited them to participate in the project leaving them free over a symbolic nine months to create the most appropriate work in the ways that work best for them.

So, though each work appears in the order listed above under 15 headings:

Phase 1 – Creation
Phase 2 – In the Beginning
Phase 3 – Impregnation
Phase 4 – Conception
Phase 5 – The Announcement
Phase 6 – The Early Growth in the Womb
Phase 7 – The Child Leaping in the Womb
Phase 8 – Anxiety of Waiting
Phase 9 – The Birth Moment
Phase 10 – The First Breath, The First Sound, The First Grasp
Phase 11 – Holding the Newborn Child
Phase 12 – The Song of Joy of the Whole Creation at the Birth of the Newly Born
Phase 13 – The Mother Feeds her Child, the Child Sucks at the Breast
Phase 14 – The Naming, The Blessing, and The Hope
Phase 15 – Connection of the New Birth with the Whole of Creation

you don’t have to think of the works as telling what looks like the story of the birth of Christ.  Leave out the Biblical words like ‘creation’, ‘in the beginning’, or ‘the blessing’, and the works speak for themselves.  Only one in fact makes a direct and very clever reference to traditional Christian art – Deborah Kelly’s photomontage in Phase 11: After After del Sarto from her larger work The Miracles, in which “The portraits were shot across Australia with the assistance of photographer Alex Wisser, using fabrics and clothing that Kelly collected to suggest the drapery-rich compositions of Renaissance art.” [https://www.artlink.com.au/articles/4000/deborah-kelly-the-miracles/]

On the other hand, if you would like to be made aware of Christian philosophical interpretations of the works, although entry to the exhibition is free you should pay $5 for the excellent catalogue in which the reproduction of each work is accompanied by an erudite short essay.  These are 15 individual responses written by academics and church ministers representing the Australian Catholic University, the Australian Centre for Christianity and Culture,  St Mark’s National Theological Centre (Charles Sturt University), the Uniting Church and the Bishops Commission for Ecumenism and Interreligious Relations.

Dr Raymond Canning, the Executive Secretary of the Bishops Commission, demonstrates in one short quote the philosophical approach behind this exhibition: In the Qur’an 49:13 Allah is heard to reveal: “O mankind!  Truly We created you...and We made you peoples and tribes that you may come to know one another.”

The opening of the exhibition in Canberra was itself a ceremony not one of speeches of the conventional kind.  Stephen Pickard spoke briefly to thank the appropriate people, then passed proceedings over to women, the focus of the art works.

Linlea Rodger took a political viewpoint, saying “Clearly something very new is coming to birth at BHP”, the mining and industrial business where research shows “that workplaces with a high proportion of women are happier, have a better safety record, and enjoy higher productivity” and so “is taking the giant leap of fast tracking the training, mentoring and placement of women.”

She then looked at the results of the US presidential election, referred to T S Eliot’s saying that “birth and birthing can, at the time, feel and look more like death – bloody, dangerous, painful and uncertain”, concluding “As I see it, what each of these pictures conveys to us in different ways is the pregnancy of uncertainties...and I invite you to invite hope...that the power of life is stronger than the power of death, and that all birthings can also beget the kind of hope which has the power to wrestle with fear.”

Thea Pickard, whose own 18 month old son cutely gazumped her at the microphone, chose to focus on her own experience of birth.  Reflecting on the quite confronting painting by Chris Wyatt Moment of Birth, she found herself imagining the guardian of women’s mysteries, the patroness of midwives, Lilith – “the first wife of Adam” – in a substantial poem full of metaphor, ending

I am the wild woman within
that eternal place of reckoning
Always beckoning
Come in, come in
The door is open
The hearth is warm
The kettle on
Make yourself at home
And let’s get on...

Women’s poetry was powerfully complemented by the songs of Glenda Cloughley and a chorus of women, with a highlight performance of the words of Jane Addams, founder of the Women’s International League for Peace and Freedom (1919) and the second woman to win the Nobel Peace Prize in 1931.

Though they won’t be there when you visit Seasons of Birth, you can find, and join, a chorus of women at www.chorusofwomen.org , and see and hear them in person at this same venue on Saturday November 26, 2016 from 6 pm, after the final showing of the art.