An Evening With Groucho - The Q 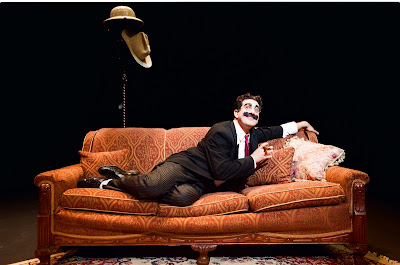 It's a brave man who falls asleep while Groucho Marx performs, as one unlucky audience member discovered when Groucho impersonator Frank Ferrante woke him up and then sent an usher for coffee.  Ferrante returned to him throughout the night for the occasional jibe (and repeat coffee order).  While other victims took his gentle insults with good grace, this poor man did not look like he was having a good night out at the theatre.  I was mainly glad it wasn't me.

An Evening With Groucho is a straight-up tribute show, polished and refined to incarnation by the decades that Frank Ferrante has been wearing the greasepaint moustache and depicting the great comedian in his prime.  Ferrante starts off out-of-character talking about his own love of Groucho and his primal encounter with his hero, then applying the distinctive make-up in a transition that draws our attention to the fact that he is playing a character, much as Julius became Groucho for his own performances.

Ferrante delivers Groucho's famous songs, and the show benefited from excellent piano accompaniment that heightened the slapstick vibe, but the core of the show was extensive audience interaction, with the house lights frequently coming up so he could engage in spontaneous patter with audience members.  Groucho's horn-dog persona came into play with frequent proposals, smooches with an usher, and an extended flirtation with a green-haired nurse who turned the tables when she asked to examine the stethoscope he was using in a routine.  At one point Ferrante even said he had run out of material and asked if he could go home early, but the audience was having such a good time that they cheered for him to stay.

Groucho's humour is fast-paced but with a hint of the dad joke, a victim of its own celebrity - jokes lose a lot of their impact when the punchline has passed into cliché.  But Ferrante's delivery was sly enough to raise a chuckle, and he frequently upbraided the audience for being a bit sedate.  He also quickly realised that one of the swiftest ways of entertaining a Canberra audience is to make a dig at Queanbeyan.  Ferrante also nailed the physical comedy, from Groucho's curtsy to the audience to his highly affected walk.

Ferrante touched on each Marx brother in a nostalgic retrospective and finished with a description of Groucho Marx at the end of his life serene and at peace.  Ferrante brings back some of the spirit of vaudeville, and the thousands of hours he has spent working audiences comes out in a spontaneity that perfectly suits the character he is keeping alive.  The audience seemed to be mostly familiar with the Marx Brothers (even if they were less familiar with the quiz shows Groucho went on to host), but Ferrante's excellent performance would be enough to sustain an audience that had somehow never heard of the icon he brought to life.

Posted by Canberra Critics Circle at 11:33 AM