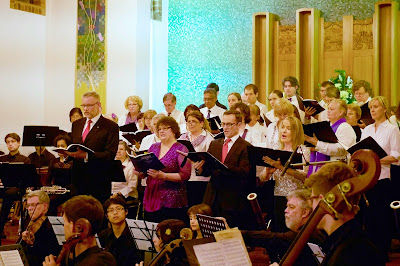 Handel's Coronation Anthems were commissioned for George II's coronation which took place on 11 October 1727.  Three of the anthems were performed in this concert.

Beginning with “Zadok the Priest”, the choir handled the dynamic opening of this anthem with great confidence and there was a good balance between the choir and the orchestra.

The choir’s singing of the quiet passages of the second anthem, “Let Thy Hand be Strengthened” was impressive in its sensitivity and the third anthem presented, “The King Shall Rejoice”, was passionately sung.  The trumpet playing by Farzana Choudhury, Keydan Bruce and Sam Hutchinson, so important to this work, was excellent.

Mozart’s Requiem, uncompleted at the time of his death in 1791, is a work that never fails to stir the emotions.  In this concert, the choir sang the version completed by Richard Maunder.

From the spectacular opening to the optimistic ending, the audience is treated to one of the most involving and memorable works ever.  The choir sang it really well from start to finish.

Soloists Rachael Duncan, Janene Broere, Charles Hudson and Andrew Fysh sang impressively and, again, the blend of voices in the quieter passages of the work was especially fine.  The combination of orchestra and voices in the “Lacrymosa” was intensely moving.

Leonard Weiss conducted these works with great assurance and everyone involved provided the audience with an evening of music to remember.

Photos by Peter Hislop
Len Power's reviews can also be heard on Artsound FM 92.7 'Artcetera' program from 9.00am on Saturdays.
Posted by Canberra Critics Circle at 7:23 PM