An Evening with Groucho 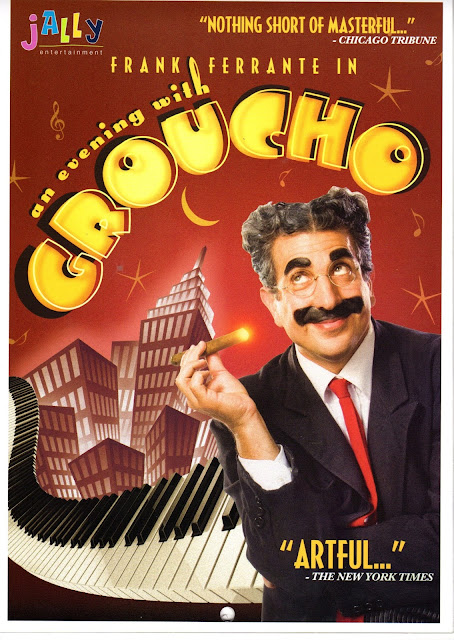 An Evening with Groucho performed by Frank Ferrante with his pianist Alex Wignall; directed by Dreya Weber.  Produced by Jally Entertainment,  at The Q, Queanbeyan Performing Arts Centre, November 22-25, 2016.

My earnest Socialist parents brought me up in England on Karl Marx, not Groucho Marx.  Perhaps they were in the audience in 1922 when, as Groucho remembers, the Marx Brothers’ attempt at zany American humour went down like a lead balloon in London.  Even when I arrived in Australia in the 1950s, though others tell me films like A Night at the Opera and Duck Soup were common fare for teenagers at the Saturday afternoon pictures, I never saw them.

So I approached An Evening with Groucho in some trepidation.  Fortunately I wasn’t seated in Rows A to D, or my fears may have been well-founded – for the aspect of Groucho Marx’s special skill in what we nowadays call stand-up comedy, which Frank Ferrante has down to a fine art, is very funny enforced audience participation.

This can only work – and be thoroughly enjoyed even by those in the immediate firing-line – because Ferrante channels Groucho’s stage charisma, a kind of excruciating absolutely politically incorrect charm, so well that we are transported back in time.  If you are English you would recognise Arthur Askey as the equivalent performer of innuendo, or if Australian it would be Roy Rene (Mo).

Ferrante’s success is because he does not merely imitate Groucho’s talk, singing and ‘dancing’ – a forerunner, I’m sure, of John Cleese’s funny walks – but he inhabits the character.  This enables him to improvise his playing with the audience for lengthy periods between the official script, all nicely related to his venue, in Queanbeyan on this occasion, to the age of the audience, and then to the personal stories that people recount even as he makes fun of them.

At one point last night the modern political scene lifted its ugly head when one woman turned out to be American, though now has lived in Australia for more than 40 years.  “So you have dual citizenship?  Don’t ever go back!”  And turning to another couple who had been married for 39 years – after having pointed out that he (Groucho) had been married for longer – 44 years, to three different wives – he then proposed marriage to the woman.  “So he could stay here” didn’t have to be said, as the audience immediately picked up on the joke, thinking of Immigration Minister Peter Dutton’s and President-elect Donald Trump’s diatribes against refugees.

An important quality of the show is Groucho-Ferrante’s playful relationship with his Adelaide pianist, Alex Wignall.  Of course, Groucho uses Alex as his fall-guy, but always with a warmth of feeling between them.  Behind Groucho’s ‘front’ there is a sense of fragility, of needing the support which was supplied by his brothers, especially Harpo and Chico in real life.  Wignall’s top-rate piano playing, from the magisterial classical to the whimsical and cute, makes him the steady influence in the show, with his gentle sense of humour, which represents Harpo for Groucho.

So, despite my woeful lack of background experience of the Marx Brothers, Frank Ferrante’s An Evening with Groucho has filled me in, in a most entertaining way.  And for further entertaining background you can buy a wonderfully informative program in the form of a 2017 calendar to hang above your workdesk for a whole year of memories!

Posted by Canberra Critics Circle at 11:04 AM