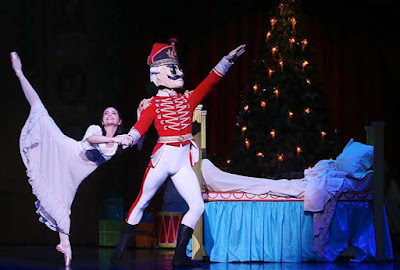 In a wonderfully Dickensian opening scene, Queensland Ballet's production of The Nutcracker shows us a large Christmas party with people at three phases of life enjoying Christmas in their own way.  The children are mad for presents, the adults are keen for dancing, and the old folks are mainly into the grog.

But as is the way with families, at these intimate gatherings feelings run high.  And with a slightly alarming number of weapons being dispensed as presents, all of the irritation and frustration that comes with the holiday season vents in cheerfully murderous horseplay.

With the girls getting mainly dolls and the boys armed for war, the stage is set for a series of daring guerrilla raids where the boys lay waste to the careful home-making of the girls.  One girl has even her dollie plucked from her arms and then thrown on the floor for a series of emphatic bayonet thrusts.

It's tempting to see this as a deliberate commentary on gender roles that culminates in rough-and-tumble Fritz breaking his sister Clara's prized nutcracker soldier.  Fritz is sent off in disgrace - another nod to the authentic Christmas experience - and thereafter it is Clara's story, a reaffirmation of the values of imagination and compassion that, at least in the period the play is set, were part of an education reserved mainly for daughters.

The vivid characterisations of the Christmas party sequence give the performers an opportunity to showcase a love of movement beyond the formality of ballet.  Whether playing a small boy or a doddering and drunken grandfather, the performers carefully display character in movement.  Watching an old woman (of course a much younger dancer) hobble slowly to bed at the end of the party was in its own way as moving as the virtuoso dancing on display in the second half of the show.

After the party Clara slips into bed with her new nutcracker doll, and after a frightening dream where she is attacked by a mouse army her nutcracker springs to life and routs the enemy in a short but decisive engagement.  He then whisks her off to the land of winter (a particularly elegant scene change), and thereafter takes her to a land of sweets where the locals entertain her with a multicultural program of dance.

From here it is composer Tchaikovsky's show, with a program of dances set to highly memorable songs.  Although Tchaikovsky was known to denigrate his work on the Nutcracker, the pieces are some of the most famous in Western music, perhaps because the clarity of the melodic line makes them instantly accessible.  The "Russian dance" is justly famous (and here complemented by some impressive acrobatics from the dancer), but the "Dance of the Sugar Plum Fairy" still stands out as distinctive and ethereal.  And of course the "March" early in the ballet is synonymous with this ballet.

At this performance music was played back, rather than performed life, and while it was difficult to detect the difference during the show artistic director Li Cunxin did raise this an issue in a presentation after the show, as part of a passionate argument for arts funding.  Based on the artistic achievement on display this night, he found considerable agreement from the audience.

The Nutcracker is a gift to the performers, with rich and interesting characters for the dancers to embody.  Whether it is the sinister, eye-patch wearing toymaker Drosselmeye (who spins his cape constantly and with great glee), the wind-up dolls that halt about for the amusement of the Christmas party, or the ragged and hungry legions of the Mouse King (a character worth his own ballet, if not an opera), the Nutcracker bursts with character.

I can think of no better way of getting into the spirit of Christmas - that unique mix of sugar plum faeries and bayonet attacks - than this excellent, joyful production of a classic ballet.