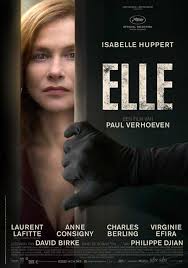 This graphic and unsettling film from an arch provocateur known for Hollywood blockbusters is not without its director’s signature high-level sex and violence, despite the art-house credentials. Elle, a first in French language for Paul Verhoeven who brought us Basic Instinct and Robo Cop, is set in the affluent world of bankers and entrepreneurs, and it begins with a vicious rape.

On the basis of this opening scene and several others, recommendations for Elle have to be made with caveats. Some will loathe it. Yet it isn’t a film to write off on account of its violence (you may have to turn away) or for the very contentious space it throws open to discussion.

On the face of it, there is an older professional female executive who may be in some way undone or ‘set free’ by her experience of violent sex. There is also a dangerous proposition that ‘no’ can mean ‘yes’ and assent may not be necessary. Both are outrageous propositions, and while it might be reasonable to read Elle this way, it is more complex and layered than that. Elle is based on a popular French novel by the name of Oh… .

The rape victim, Michele (Isabelle Huppert), is the chief executive of a video games firm that she has herself built. It creates lurid, violent graphic fantasy material for gamers. The built-in contradiction that she peddles violent pornographic video and winds up being a victim of a hideous fantasy herself is obvious, but the film is hardly making a point of it.

Michele’s complex, layered character is inhabited by one of few actors suited to tackle her. It is no surprise that Huppert, always interesting and often minimalist and inscrutable, has often been cast in her long career as a cool customer, a difficult and complicated woman. She has been directed by the likes of Claude Chabrol, Michael Haneke, and Claire Denis and on one occasion by Paul Cox. She played a woman dealing with blindness for the late Australian director in Cactus (1986).

After the rapist leaves, Michele tidies up. She sweeps up the glasses and other items broken during the assault, has a soothing bath, orders sushi takeaway and goes to bed. Her facial bruising will be explained as a fall from her bicycle and she will not inform police. But it becomes clear that she intends to find her assailant. To then do what? Does she even know?

It is revealed that Michele is not a popular boss, more likely actively disliked, but business is thriving. For her young male employees, imagining grotesque rape fantasies and stripping young women for motion capture imagery is a daily function in their line of work. Behind closed blinds in her office, Michele conducts an affair of her own with a married colleague.

At the same time, Michele expresses withering disapproval of her ex-husband’s new young girlfriend, her aging mother’s gigolo and of her son’s vituperative, pregnant girlfriend. Why is everyone in her life so hopeless? She may have a point, and we may laugh at their expense, but she is way out of line, and controlling. It becomes increasingly clear that self-control has been her means to survival.

The eventual revelation of a ghastly past that she has had to leave behind provides more than enough explanation as to why Michele won’t inform the police and invite public scrutiny into her life again. Given the appalling media exposure victims can receive after violent assaults, her bleak past is unnecessary backstory. It doesn’t seem unreasonable that she decides to go about things her own way, and won’t accept the role of victim.

For Michele, it is all about control over her privacy. Even where it might mean risking more violent intrusion into her personal space. It is a tribute to the contrarian intelligence behind the film, that Elle is able to offer its controversial agenda.

Circumstances have brought the esteemed Huppert and controversial director Verhoeven together to explore how a successful self-made businesswoman, sexy and single by choice, can opt for full control and risk the consequences. It’s a provocation that suits them both.