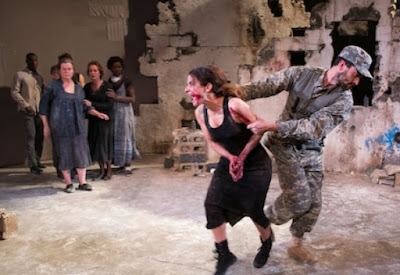 Creon (William Zappa) is a popular politician, the reassuring voice of democracy in a Thebes that has been shattered by brutal civil war.  Clad in the distinctive uniform politicians use when meeting the people - jacket but no tie, and with just a hint of paunch - he reassures and inspires the survivors of this messy war with beautiful rhetoric about the peace and freedom to come.  It's morning in Thebes.

The only sour note in the speech is Creon's insistence that the body of a notorious terrorist currently rotting at the gate of the city be left where it is, untouched on penalty of death.  It is a heavy-handed and clumsy attempt to create a political symbol, trying to tap into the public's hate to bolster his new administration.  But Creon fails to respect death as the great leveller, and the object of pity festering just outside the city sits uneasily with the crowd.  Worse, the terrorist is his own nephew, but Creon is determined to put the state ahead of any obligation of family.

This adaptation of Sophocles' Antigone by Damien Ryan (who also teams with Terry Karabelas as co-director) is determined to make the ancient tragedy modern and relevant, thrusting the story into the world of failed states.  The set by Melaine Liertz evokes a blasted-out Baghdad city, and frequent references to water supply and utilities evoke the daunting logistical challenge ahead for Creon and his caretaker government.

The setting undermines Creon: a rotting body could never be as important to the mob as access to drinking water.  The tactic feels feeble, anchored more in Creon's own grief over his nephew's betrayal than sensible policy.

Although the adaptation brings the play into the modern day, it ignores the strangeness and distance of the original text, pasting plausible motivations onto characters whose concerns might seem alien to us.  Sophocles' original play is strongly concerned with devotion to the Gods, and Creon is punished for his impiety in not allowing proper burial rites to take place.  Here Antigone (Andrea Demetriades) is frantic and traumatised, compelled by her demons to bury and re-bury her loved and hated brother.

It is a far cry from a principled stand.  Rather than the clash of competing ideals of the original text, we have two compromised and war-worn individuals hypocritically unwilling to compromise, while this family squabble ignores the good of the community.

However the play does tap into contemporary concerns effectively, in particular the need to mourn after death.  The female parts in the play are strongly developed, with a deliberate contrast between tomboyish Antigone and her kind and beautiful but somehow feckless sister.

In another departure from the original text, the chorus here is strikingly differentiated - one chorus member is even visibly pregnant.  The crowd Creon and Antigone have to sway is not a faceless force but a very human society, susceptible to both reason and irrational fear.  Anna Volska is sinsister as the gender-fluid sage and agent of fate Tiresias, but in this remix of the story the character feels redundant.  The Gods are certainly not helping rebuild the schools and sewer system, why should they have much say in burial rites?

In the time of Sophocles, plays were retellings of well-known stories, and Sport For Jove's refreshing new production is heir to that tradition.  The writing is crisp, alert, and often very funny, and supported by acting that is wonderfully engaged and in-the-moment.  However by clinging to Sophocles' work it threatens to alienate fans of the original text.

This is an Antigone for a post-God world, where everyone is compromised and the enemy is not fate but post-traumatic stress disorder.  Creon making politics of the dead is a self-evident dud, and the chorus are expectant for a leadership that gets lost in family drama.  Creon may think he is standing up for principle, but he is only overwhelmed by the endless challenge of rebuilding a broken nation.
Posted by Canberra Critics Circle at 7:58 AM