Title and Deed by Will Eno 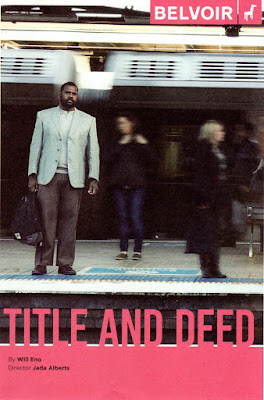 Jimi Bani, a Torres Strait Islander of Mabuiag and Darnley Islands heritage, gives a moving performance, directed by Larrakia woman Jada Alberts, of a quite unusual American play by Will Eno.  Title and Deed  was included in the New York Times and The New Yorker’s Top 10 Plays of the Year 2012.

Bani’s role is The Traveller – away from ‘home’ and recently arrived ‘here’.  He speaks to us, surprised and thankful for our willingness to listen.  What he says is an internal conversation with himself in which he imagines us to be his audience.  Except that we are real.  Perhaps the weirdest moment theatrically was when the stage lights had faded on him in character and the house lights came up for applause.  It really felt as if we were applauding this engaging but ultimately worrying stranger rather than this highly accomplished actor.  Only on his exit (through the audience in the tiny Belvoir Downstairs) and reappearance did we feel that now we were applauding Jimi Bani rather than this rather strange but thoroughly recognisable character, The Traveller.

What was worrying was that he clearly had something out of kilter emotionally because of his occasional stammer when he would find himself unable to say the words he was searching for, because of his hearing things in his head that we couldn’t hear, because of his swinging from outgoing confidence to obsequious thanking us, with sudden retreats physically into moments of unexplainable despair – as he had seemed, leaning against the dirty brick wall, slightly twisted with head down, when we had arrived to take our seats.

We were clearly ‘here’, but he was, as he said at one point, not exactly ‘there’ – which might have been ‘home’ – but he was perhaps ‘somewhere’, which made him think he might be ‘nowhere’, leading him to think about how we have invented all our words to try to help ourselves understand life and death.  He looked into our eyes – actually into the eyes of one of us – and then quoted “The eyes are the window into our eyes” – not from some famous person, but from Brian, with whom he had painted a house. Later he thought perhaps he was quoting Shakespeare, but then remembered it was Brian.

And so we were engaged intellectually in a philosophical exploration of language, meaning and the impossibility of actually knowing what is in someone else’s mind, while emotionally we gradually became aware of the background to his anxieties derived from very ordinary parental demands like “Where do you think you’re going?” or “What do you think you’re doing?”  We even learned that he had not been breast fed, and after losing the rubber nipple from his bottle had been left to drink from a cup, which his mother had said was not very satisfactory.  And he clearly had been afraid of his father.

No wonder his apparently brief relationship with Lauren – he found a calendar in which she had blacked out all the days they had had together – was not as ‘here’ as he had thought it was.  Now his father had died (first, as Nature decreed, and without his being there) and his mother had also died (he had managed to get ‘there’ for her) his parents ‘are dead for me now’, he explained.  It was surprising what we laughed at, yet it was with sympathy as we now understood why he had to be The Traveller, and with empathy as we realised that like him we are ‘travelling’ until we die.

And so this is why I found it interesting to know how this play, written by a New Yorker, with all its imagery and references centred in a kind of American small town  life, could resonate for a Larrakia woman writer and now director from Darwin and a Torres Strait Islander actor who had travelled all the way to train at WAAPA in Perth, coming together to work at Belvoir in Sydney (with support for Indigenous theatre by the Balnaves Foundation).

As Jada Alberts wrote in her Director’s Note, “I hope you see and forget to see, the skin he’s in.”  And that was exactly what this production achieved – a moving performance of an unusual play, in which we were transported from ‘wherever’ to our immediate ‘here’, seeing as Jada hoped “yourself in the character you meet, or in the least someone you care for”.


Posted by Canberra Critics Circle at 10:34 AM