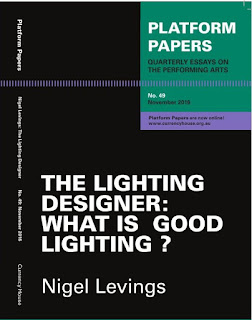 Free, but essential to book at info@currencyhouse.org.au

Media Release: About The Author
Nigel Levings is one of Australia’s leading theatre lighting designers and in his early career was the first to be fully employed by an Australian theatre company as a lighting designer. In a distinguished career he has lit over 490 original productions including 174 operas and 28 musicals. He has lit opera in St Petersburg, Paris, Washington, London, Cardiff, Berlin, Baden Baden, Innsbruck, Bregenz, New
York, Los Angeles, Chicago, Houston, Dallas, Seoul and Toronto as well as all the major opera houses of Australia.

His awards for lighting design include the Helpmann and Green Room Awards, the Los Angeles Ovation Award and the Canadian Dora Mava Moore Award. On Broadway he has won two Outer Circle Critics Awards, a Drama Desk and a Tony Award. He was awarded the Centenary Federation Medal by the Australian Government for his services to opera lighting and, in 2003, was honoured by the SA Great – Arts Award.

I, as a one-time drama teacher, am very pleased to note that Nigel Levings begins: “I grew up in Melbourne and in primary school our Year 6 teacher, Mr Edgar Seppings, gave me my first brush with the theatre. I was too young at the time for much recall but I do remember the magic of that lit space and the surrounding darkness.”

If I were still teaching I would be sure to invite Nigel to speak to my students, especially about the personal attributes they should aspire to.

He writes: When I get it right, my lighting design springs from a desire to share with an audience this love of light: visibility, poetic density of meaning, but above all pure, succulent, sensuous, visual pleasure and Good lighting is intelligent lighting. It springs from deep thought about the text and the director's interpretation of it.

This is not a geek speaking, but an artistic designer.  His personal history informs his development in and experience of the craft, the industry, the technology and the changing perceptions – including of critics – since he “was offered the position of head of lighting for the Melbourne Theatre Company at Russell Street Theatre... at the beginning of 1971.”

The history and comparisons between his experiences in Australia and overseas would give my students an excellent grounding, while his enthusiasm 45 years later must inspire them when he writes The play of light on surface continues to be a source of constant delight and almost physical pleasure for me, an inspiration for my work. When I get it right, even if only to my partial satisfaction, my lighting design springs from a desire to share with an audience this love of light: visibility, poetic density of meaning—but above all pure, succulent, sensuous visual pleasure.

This is not so much a how-to-do essay, but rather a how-to-be reading experience – genuinely enlightening, indeed.  Nigel knows his stuff from the “small resistance dimmer board on a perch position behind the proscenium” to the “current lighting control systems [which] allow extremely complicated manipulation of the transition from one lighting image to the next [where] we are now well in reach of that dream of a totally fluid light plot, one in which the light never ceases to shift over the entire course of the play.”

Yet he makes it clear in his final chapter that technical skills must be integrated with personal and interpersonal skills, like working calmly and quickly under extreme time pressure, making both spontaneous and planned creative decisions, being able to quickly comprehend both the surface meaning of a text and its underlying subtext, having empathy for the demands faced by performers and being willing to adapt, having knowledge of the physics of light and how the eye works with a psychological understanding of the process of perception, as well as a broad understanding of
electricity and electronics.

It looks like he’s given me the assessment criteria for judging my lighting students’ progress.  But there’s still “Above all—you need a thick skin and a not-easily-bruised ego.”  Hmmm!  Just what we critics need, too?

Don’t miss Platform Paper No 49, especially (if you’re a critic) Chapter 5 – The Opinions!