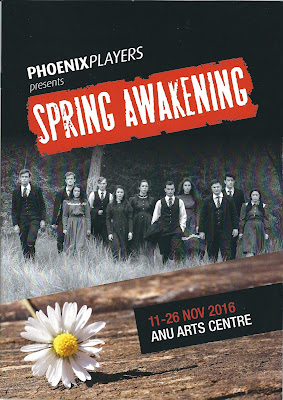 ‘Spring Awakening’ won Tony Awards for Best Musical and Best Musical Score in the 2006/2007 Broadway season.  It’s based on the controversial 1891 play by Franz Wedekind which was not performed until 1906.  It has often been banned or censored since then due to its controversial subject matter.

Set in 1891 in Germany, the musical follows the trials and tribulations of a group of adolescents as they explore their emerging sexual feelings in a repressive time.  The musical is quite fearless in its depiction of sexual matters and its rock-infused musical score provides the link between that earlier time and today, showing that adolescent issues around sexual emergence haven’t got easier over time.

This production by Phoenix Players is a triumph for everyone concerned.  The directors, Grant Pegg and Kelly Roberts, have realized their vision with this work and have produced a show that is dazzling, moving and memorable.

The ensemble of young actors all give strong performances with very fine singing.  Callum Bodman and Kaitlin Nihill as the young lovers, Melchior and Wendla, are heart-breakingly good and Pip Carroll as the doomed Moritz gives his role a fierce and realistic intensity.  Everyone else has their moment to shine and does so very well.  Kelda McManus and David Cannell play multiple older people and both give excellent, uncompromising performances.

The towering wooden set design by Chris Zuber adds much to the atmosphere of the show and the complex lighting and sound design by Eclipse Lighting And Sound is simply superb.  Costumes by Jennie Norberry are perfectly in period with a strong attention to detail.

Musical direction by Matt Webster of this unusual music score is brilliant, bringing out all the complexities and subtlety of the music while making it all seem effortless.  It’s not a score that makes heavy demands on an audience but you can sense that it’s not easy for singers and orchestra to perform.

The way this production flows onstage is thrilling and imaginative.  It’s exciting to watch the choreographed movement of the actors as the show progresses.  Nothing is predictable and everything works.

This is one of the best shows I’ve seen this year.  It’s an event not to be missed!

Len Power’s reviews are also broadcast on Artsound FM 92.7 ‘Artcetera’ program from 9.00am on Saturdays.

Posted by Canberra Critics Circle at 9:58 AM