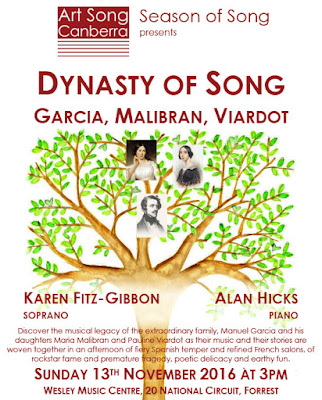 In a program that turned out to be a fascinating history lesson as well as an afternoon of glorious singing, Karen Fitzgibbon and Alan Hicks presented songs by Manuel del Popolo Garcia, two of his daughters and one of his grandchildren.  Before singing a selection of their songs, Karen Fitzgibbon gave a detailed history of each of these family members who all had very active careers in the music and opera worlds as singers and composers in the 19th century.

Karen Fitzgibbon is an engaging performer with a winning smile and a beautiful soprano voice.  Her choice of songs was a good showcase for her.

Of the songs by the patriarch of the family, Manuel Garcia, ‘Es corridor!’ was delightfully sung with a humorous undertone and with ‘Je t’aimerai’ and ‘L’Absence’ Fitzgibbon gave us a strong emotional and contrasting sense of the joy and sadness of love.  ‘Parad!’ had a haunting quality and was sweetly sung.  They were all accompanied superbly by Alan Hicks.

Garcia’s daughter, Maria Malibran, was a famous opera singer in her day who composed songs as well.  The high notes of ‘Il silfo’ were sung thrillingly and apparently effortlessly by Fitzgibbon and she brought a chilling sadness to ‘La Visita della Morte’, a song that seemed to predict Maria Mallibran’s early death at 28.
The songs of Maria Mallibran’s sister, Pauline Viardot-Garcia, gave Fitzgibbon the opportunity to cover a wide range of emotions.  ’Moriro’ and ‘Cancion de la infanta’ were sung with great feeling and the accompaniment by Alan Hicks of the latter song was especially fine.

The last part of the program showcased songs by Louise Heritte-Viardot, Pauline’s eldest child.  Fitzgibbon gave a fine performance of ‘Sehnsuch’, bringing out a strong sense of yearning, the theme of the song.

An encore of ‘Madrid’ by Pauline Viardot-Garcia brought this memorable concert to a rousing close.

This review was first published in the Canberra City News digital edition on Monday 14 November.  Len Power’s reviews are also broadcast on Artsound FM 92.7 ‘Artcetera’ program from 9.00am on Saturdays.
Posted by Canberra Critics Circle at 6:16 PM