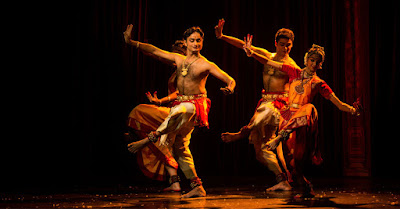 Designated by the Indian Parliament in 1994 as an “Institute of National Importance”, the Kalakshetra Foundation is dedicated to the preservation of Bharantanatyam dance and Gandharvaveda music.

Rukmini Devi Arundale founded the company in 1936 so that she could develop her own Kalakshetra style of Bharatanatyam. She staged group performances and Bharatanatyam-based ballets, drawing to her, noted teachers, musicians and dancers, and developing a worldwide reputation for impeccable technique and aesthetic.

Having seen this company in 1966 when it toured Australia for the Arts Council under the direction of Rukmini Devi Arundale herself, when it brought several of her dance dramas as well as some of her shorter works, this single Canberra performance, presented in the presence of the Governor General of Australia, Sir Peter Cosgrove and Mrs Cosgrove, offered a compelling opportunity to catch up on how the company has developed over the last 50 years. Especially more so because the company had chosen to present for this tour, “Jatayu Moksham” which preserves Rukmini Devi Arundale’s original choreography. 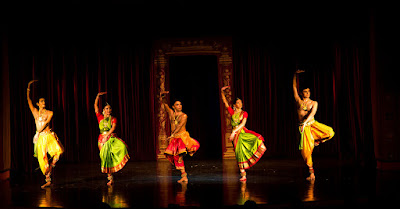 As a piece of dance history, “Jatayu Moksham” is fascinating. Based on an epic poem in the Ramayana about the killing of a noble eagle, the staging is very traditional. The piece was performed over 90 minutes, without interval.

The scenery, obviously designed for theatres less sophisticated than the Canberra Playhouse, was simple but effective, consisting of a forest backdrop behind a scrim and three hanging borders on either side of the stage. These remained constant throughout the performance.  Various items like thrones and benches were brought on and off as required and changed lighting states indicated the passage of time. Transformations were achieved simply by switching dancers during short blackouts.

The angular, straight, ballet-like kinesthetics of the Kalakshetra style, while notably different from the more sensual movement of the Odissi style of the Nrityagram Dance Ensemble seen earlier in the Confluence Festival, was superbly performed by the twenty-plus, highly trained male and female dancers. The accompanying Gandharvaveda music was provided by an onstage vocalist and musicians, and while the costumes were also less lavish than those of the Nrityagram group, they were still attractive and appropriate for the storyline. 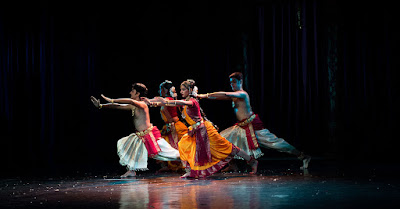 It would have been desirable to be able to record here, the names of the dancers who participated in this performance, or at least those of the principals, who are no doubt renowned dancers in India. However there was no information about the dancers, or indeed the work, available at the theatre.
Although each dancer was introduced to the audience at the end of the performance, the quality of the sound made it impossible to decipher their names. Nor was it possible to read the small television set in the theatre on which their names were briefly displayed.  A request to the Confluence Festival secretariat also failed to elicit this information at the time of writing.

It was announced at this final Canberra performance of the Confluence Festival of India in Australia that the festival would be presented again in 2017. Hopefully the organisers will give thought to providing more information about the participating performers, so that we can better appreciate why these particular performers have been chosen to represent their country in this very important and influential festival.

This review also appears in Australian Arts Review. www.artsreview.com.au
Since writing this review, the following cast list was received from the Event Executive on 22nd November 2016.