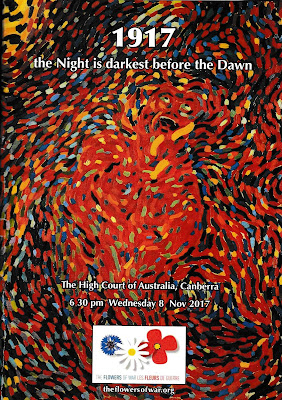 ‘1917 - the Night is darkest before the Dawn’, the last of the three ‘Flowers of War’ concerts for 2017, focussed on the war year 1917.  Beginning with a warning of the coming Spanish Flu epidemic that would kill millions of people in 1918, the program continued with music related to the various battlegrounds of the war and also reflected on the experience of prisoners of the war, culminating in an optimistic prayer for peace.  It was a moving experience to share with the musicians and singers.

Directed by Christopher Latham, the program of 14 items varied widely in music styles.  The detailed notes in the excellent program added another dimension of appreciation to the concert.

It commenced with ‘From A Dark Night’ by Lili Boulanger.  This was her last annotated work before falling victim to the Spanish Flu.  It’s a sombre work of great beauty and sadness and it was sensitively played by the ensemble of Timothy Young, piano, Christopher Latham, violin and David Pereira, cello.

The highlights of the works for instruments only included ‘Tuba Mirum’, an arrangement of music by Nigel Westlake and Alex Lithgow, with an electrifying performance by the ensemble and Paul Goodchild on solo trumpet.  Timothy Young on piano gave a memorable performance of Prokofiev’s ‘Toccata’ and the ensemble played ‘The Silent Field’ by Elena Kats-Chernan with a quietly emotional intensity.

Singers Louise Page, soprano, and Christina Wilson, mezzo-soprano, gave fine performances in several items.  Their big voices sounded wonderful in the acoustic of the High Court.  Louise Page gave a heart-felt and very moving performance of ‘Even Such Is Time’ by Ivor Gurney.  The combination of Page’s voice and the viola playing of James Wannan for ‘Come Away Death’, with words by Shakespeare and music by Benjamin Dale, was intense in its sensitivity.  The optimism of Erwin Schulhoff’s ‘Die Goldnen Winde’ was clearly expressed by Louise Page in a performance of great power and beauty.

Christina Wilson gave an especially moving performance of Elena Kats-Chernan’s ‘Lacrimosa: The Fields Of Bullecourt’.  Accompanied by the Sculthorpe String Quartet and Timothy Young on piano, her performance of ‘Vimy Ridge’ by Lizzy Hoyt was clearly and simply sung, giving it a strongly emotional impact and she gave a fine performance of the traditional ‘Chanson De Craonne’.

The concert ended with ‘Pie Jesu’ by Christopher Latham.  We were all invited to sing along with the soloists and ensemble and Leonard Weiss coached and conducted the audience.  It was a moving experience and the culmination of an emotionally charged and highly memorable concert.

Several of the works presented were previews from ‘The Diggers’ Requiem’ which will be performed in October 2018.  That promises to be a memorable evening, too!

Len Power’s reviews are also broadcast on Artsound FM 92.7’s new ‘On Stage’ program on Mondays from 3.30pm and on ‘Artcetera’ from 9.00am on Saturdays.
Posted by Canberra Critics Circle at 3:47 PM