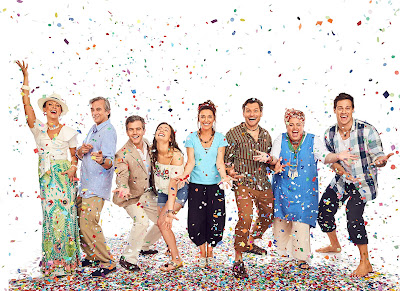 Mamma Mia! How Can I forget You?  It seemed like all Canberra was in party mode for the opening of t he Australian season of this brand new production of  “Mamma Mia”, and it wasn’t disappointed. In an unusual move, Producers Louise, Michael Coppel and Linda Bewick, decided to launch this new production in Canberra, prior to its National tour, and already the Canberra season is nearly sold out.

With fresh new set and costume designs, a good-looking, energetic cast, with Natalie O’Donnell, who played the bride-to-be Sophie in the original Australian production, now playing Sophie’s mother, Donna, “Mamma Mia” returns to the stage in a beautifully conceived production guaranteed to enchant a whole new generation who only know the show from the film.

One of the first Juke Box musicals, “Mamma Mia”, remains remarkable for the way familiar ABBA songs are seamlessly integrated into the storyline of a young bride-to- be, Sophie, who decides to invite three of her mother’s old flames to her wedding, in an effort to discover the identity of her father. These songs have been given fresh new arrangements by Stephen Amos, with overtures and entr’actes which literally lift you out of your seat.

Director Gary Young has tweaked the show slightly to give it an Australian flavour, and included some contemporary references. We now have Chris from Queanbeyan, and Bill from Batlow among the characters. He keeps a clear focus on each of the characters and how they fit into the story, and though the audience know every line of the ABBA songs, the way those lyrics fit so seamlessly into the storyline still surprises and charms, and the story feels even more captivating in Linda Bewick’s postcard pretty blue and white Greek taverna setting, and Suzy Strout’s supremely wearable and elegant costumes.

Sarah Morrison is a delightfully fresh young Sophie Sheridan, and her scenes with her mother, Donna, (Natalie O’Donnell), are affectingly played by both actors, especially the scene where Donna dresses Sophie for her wedding.

The male roles are less showy, but Ian Stenlake as the suave and charming Sam, Phillip Lowe as the lovable eccentric Harry, and Josef Ber as the confused travel writer, Bill, succeed in convincing the audience of the difficulty of Donna’s predicament, and thankfully, all sing superbly.

Stephen Mahy as Sophie’s fiancé, Sky, and Sam Hooper and Alex Gibson-Giorgio as his mates, Pepper and Eddie, and Monique Salle’ and Jessica Di Costa as Sophie’s friends, Ali and Lisa, all offer strongly etched characterisations, as well as dance up a storm in the ensemble numbers for which Tom Hodgson has devised some sensational choreography with plenty of cheeky dance moves to snaffle for your next party.
But why wait for a party?  “Mamma Mia” is a party. A party which received a rapturous reception at its Australian premiere. Don’t miss out.

This review first published in the digital edition of CITY NEWS on 1st December 2017
Posted by Canberra Critics Circle at 1:49 PM