PETER AND THE WOLF 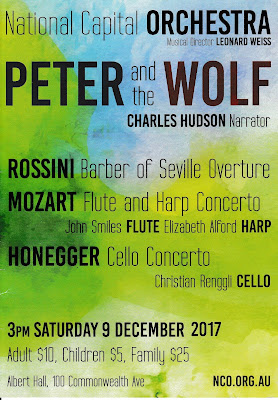 How do you capture the attention of young to very young children at a classical music concert?  The National Capital Orchestra gave it a valiant try with their concert that included children’s favourite, Prokofiev’s ‘Peter and the Wolf’.

The first item, Rossini’s ‘Overture to the Barber of Seville’, competed with a fair amount of noise as the children settled down.  Some children were captivated by the music and sat quietly, taking it all in.  Others, of course, had no idea why they were there and behaved predictably.

When the item finished, Leonard Weiss offered the opportunity for one of the children to conduct a short section of the overture.  Young Henrietta was selected and she strode confidently to the podium as if she did this every day.  It must have been a thrill for her to feel the power of the orchestra under her direction.
The next item was the second movement of Mozart’s ‘Concerto for Flute, Harp and Orchestra’ with soloists, John Smiles (flute) and Elizabeth Alford (harp).  The children were invited to ‘ooh’ and ‘ahh’ at the really nice bits and did so enthusiastically.  Overheard behind me was a young lady who loudly asked about the harp player, ‘How does she know which string to play?’
Christian Renggli on cello then joined the orchestra to perform Honegger’s ‘Cello Concerto’.  It looked a bit of a challenge for Renggli to play with children right at his feet, but he gave a fine, edgy performance of this fascinating work with the orchestra.

The final item and the big attraction for children was Prokofiev’s ‘Peter and the Wolf’ which was well-played by the orchestra.  As the narrator, actor/singer Charles Hudson really engaged the children with his fine voice and well-chosen physical movements for each of the characters.
Attending a concert such as this at an early age might just be the spark that inspires a young person to develop a love of fine music for the rest of their life.  That hope makes it all worthwhile.

This review was first published in the Canberra City News digital edition of 10 December.

Len Power’s reviews are also broadcast on Artsound FM 92.7’s ‘On Stage’ program on Mondays from 3.30pm and ‘Artcetera’ from 9.00am Saturdays.
Posted by Canberra Critics Circle at 8:33 AM