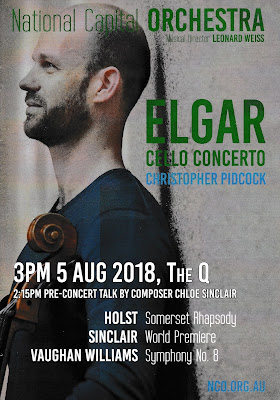 Playing to a packed Q Theatre in Queanbeyan under the firm direction of Leonard Weiss, the National Capital Orchestra (NCO) gave an entertaining concert of three works by the British composers - Holst, Vaughan Williams and Elgar - plus the world premiere of an interesting new work by Canberra composer, Chloe Sinclair.

The concert commenced with ‘A Somerset Rhapsody’ by Gustav Holst.  Written in 1907 and first performed in 1910, the work incorporates four folk songs from Somerset in England.  It was Holst’s first critically acclaimed work.  The orchestra played this atmospheric and melodic work very well.

Next on the program was Chloe Sinclair’s ‘Autonomy’, a new work commissioned by the orchestra and given its world premiere at this concert.  An emerging composer in her final year of study at the ANU, Sinclair showed great promise with this engaging and dramatic work which was given a colourful and energetic performance by the orchestra.

Vaughan Williams’ Symphony No. 8 in D minor was first performed in 1955.  A short symphony with a second movement played only by brass and woodwinds, it has moments of great drama along with lyrical sections that are highly pleasing.  The orchestra played the first movement especially well and produced a clear sound for the quieter second and third movements, leading on to a well-played dramatic finale.

After interval, cello soloist, Christopher Pidcock joined the orchestra for Elgar’s Cello Concerto.  One of Australia’s best known musicians, Pidcock performs full-time with the Sydney Symphony Orchestra and is in high demand overseas as well.  First performed in 1919, Elgar’s well-known work has a sweeping grandeur that was played very well by the orchestra.  Christopher Pidcock gave an intensely sensitive performance that was very appealing and memorable.

The choice of works by the three British composers of the 20th century complemented the new work by Chloe Sinclair.  Once again, the NCO gave their large audience an afternoon of well-played fine music.

Len Power’s reviews are also broadcast in his ‘On Stage’ performing arts radio program on Mondays and Wednesdays from 3.30pm on Artsound FM 92.7.
Posted by Canberra Critics Circle at 1:53 PM