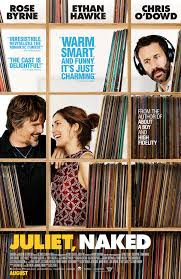 
This romantic reboot for two who could have done better in life is based on a book by Nick Hornby, the English novelist with a happy knack for making us feel good about ourselves. It is brought to life on screen by Ethan Hawke and Rose Byrne, actors who bring a sense of lived experience well suited to the backstory of foibles and wrong moves that make them and us human.

It’s probably fair to say that these days it takes a fair effort for filmmakers to forgo the cynicism and the lucrative crudity in so much of the product aimed at the young demographic.  Directed by Jesse Peretz, Juliet, Naked is, on the other hand, about honesty, hesitation and vulnerability, a light comedy with an M rating. It's also about music.

The set-up by which the couple meet involves Annie (Byrne) writing a stinking review online of the new CD from Tucker Crowe (Hawke). She only does it because the singer-songriter is the music idol of her long-time partner Duncan (Chris O’Dowd) and the focus of his tiresome pedantry.

When the review appears, Tucker drops an email to Annie to say that he agrees with her about the CD. He didn’t like it much either! This doesn’t, unfortunately, do anything to lower Duncan's enthusiasm for Crowe, enthusiasm already so great that he has an entire room in the house that he and Annie share devoted to Crowe memorabilia. 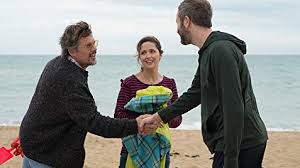 Earnest and awkward, Duncan is another of those male characters from Hornby who are totally captured by their interests, be it football (Fever Pitch) or music (High Fidelity), while they struggle in their romantic relationships. Fixations like these are common to Hornby’s work, and here the team of four writers who adapted Juliet, Naked for the screen have let it run parallel with the romance.

Hawke is the embodiment of cool, totally at ease in his own skin. It’s fair to say that his talents haven’t received the recognition that he has deserved since his breakout role, while still in school, in the marvellous Dead Poet’s Society. Perhaps a rich personal life got in the way, perhaps he hasn’t made enough strategic choices. Perhaps he has never sought more than he has attained, anyway. This raffish actor has an effortless ability for convincing audiences that his characters are authentic, no more so than in the Before trilogy opposite Julie Delpy.

The same can be said of the talents of Rose Byrne, an actor from Sydney who lives in New York. Her private life might be less spectacular, but she has been consistently so good all her career and she is especially adept at comedy. She has not, to my knowledge, felt the need to change the colour of her hair!

Because they work well together, it is a treat to watch these two actors, as people who have given up on love but find it again. Because of their engaging chemistry on screen, a pleasant but otherwise unremarkable film has a touch of the certain something that the best romantic comedies have managed to lay claim to.

Duncan, meanwhile, barely notices what he's lost. When his idol embarks on a new, more mellow direction in his music, it seems to cause Duncan more angst and disappointment than when the guy takes his girlfriend away.