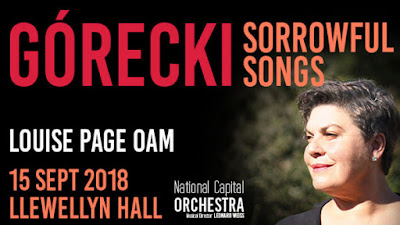 Three very different items were presented in the latest National Capital Orchestra concert and the orchestra met the individual challenges of these works very well.

The concert commenced with the well-known Vltava (‘The Moldau’), the second movement from Má vlast (My Country) by Czech composer, Bedřich Smetana.  It was played very well by the orchestra, bringing out the full colour and nationalistic emotion of this melodic and illustrative work.

Commissioned for the opening ceremony of the 2006 Commonwealth Games, Christopher Gordon’s ‘Ceremonial Games’ was given its world concert premiere by the orchestra.  The suite comprises three movements taken from the thirteen of the original event music.  ‘The Arrival’ is suitably grand and exciting and has a very interesting jazz-like section towards the end.  ‘Raising the Flag’ with its appealing and unexpected percussion was especially well-played by the orchestra.  ‘The Celebration’ was a dramatic and vibrant finale for the suite.  The composer was in the audience and gave conductor, Leonard Weiss, the thumbs-up at the end.  He had every reason to be pleased as the orchestra played it very well.


After interval, Canberra soprano, Louise Page, joined the orchestra for Symphony No. 3, Op. 36, “Symphony of Sorrowful Songs” by Henryk Górecki.  This powerful minimalist work, written in 1976, is in three movements.  The first, based around a text taken from a 15th century Polish monastic lament, was sung with great precision and quiet emotion by Louise Page.


The second movement, taken from a few lines written on a prison wall from World War 2, was sung with heart-breaking simplicity, making it a very moving experience for the audience.  The orchestra’s playing of the final passages of this movement was exceptional.  The folk song in the final movement is a song of grief by a mother who has lost her son.  Louise Page sang it with a warmth and tenderness that was deeply affecting.

This was a fine concert with good choices of works played very well by the orchestra with another memorable vocal performance by Louise Page.

Len Power’s reviews are also broadcast in his ‘On Stage’ performing arts radio program on Mondays and Wednesdays from 3.30pm on Artsound FM 92.7.
Posted by Canberra Critics Circle at 10:10 AM