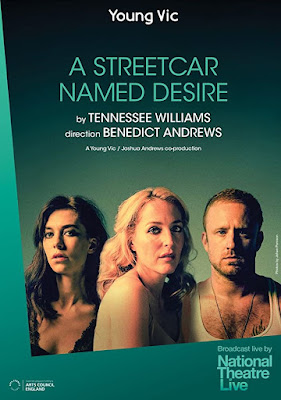 A Streetcar Named Desire, written by Tennessee Williams, first opened on Broadway in 1947.  It’s now considered one of the great American plays of the 20th century.

It focusses on Blanche Dubois, a fading Southern Belle, who visits her sister, Stella, in a rundown neighbourhood of New Orleans.  Soon, her aristocratic airs and graces begin to aggravate Stella’s brutish husband, Stanley.  When he confronts her with some uncomfortable truths he’s learned about her recent life, the mentally fragile Blanche loses her grip on reality and descends into madness.

The play brought the young Marlon Brando to prominence in a performance now considered definitive.  The 1951 movie version of the play, in which he repeated his role with Vivien Leigh in a formidable performance as Blanche, set a benchmark that is arguably almost insurmountable for other performers attempting these roles.

In the Young Vic’s 2014 production, streamed as part of the National Theatre Live program recently, Gillian Anderson of The X Factor fame on TV tackles the role of Blanche and Ben Foster takes on the role of Stanley.  Both are skilful players but the decision by the director, Benedict Andrews, to update the play to the present day has a negative impact on their performances.

Gillian Anderson gives a strong, unflinching performance as Blanche but her dialogue sounds ludicrous in the present day.  It was understandable in the original 1940s period of the play that Blanche would have grown up instilled with the southern manners and morals of the past, but that’s unlikely if she had been born in the 1970s as this Blanche must have been.  We just can’t believe in her.

Ben Foster fares better as Stanley but his attitudes and behaviour seem decidedly out of period as well.  However, Vanessa Kirby was excellent as Blanche’s sister, Stella, as was Corey Johnson as Blanche’s mild-mannered suitor, Mitch.

Directed in the round by Benedict Andrews, it had a practical, but lacking in atmosphere set, by Magda Willi.  Slowly revolving most of the time, it was a bit annoying on film but maybe it enhanced the show for a live audience.

It’s still a powerful play in spite of the updating problem and it wasn’t hard to stay with it right through its lengthy running time.  Worth seeing but could have been so much better.

‘Theatre of Power’, a regular podcast on Canberra’s performing arts scene with Len Power, can be heard on Spotify, ITunes and other selected platforms or at https://player.whooshkaa.com/shows/theatre-of-power.
Posted by Canberra Critics Circle at 2:33 PM