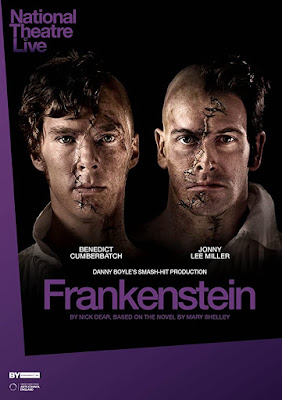 Adaptation by Nick Dear of the Mary Shelley novel
Directed by Danny Boyle
National Theatre, London
Streaming on You Tube from the National Theatre Live 30 April 2020

Mary Shelley’s novel ‘Frankenstein; or, The Modern Prometheus’ was first published in 1818.  It was written as part of a contest between herself, her future husband, the poet, Percy Bysshe Shelley and Lord Byron, the poet and politician, to see who could write the best horror story. The topic of galvanism and occult ideas had been recent themes of conversation among her companions and informed her story.

Since publication, her novel has had a considerable influence in literature and popular culture and spawned a complete genre of horror stories, films and plays.

It tells the story of a scientist, Victor Frankenstein, who creates a creature from the body parts of deceased persons and then brings it to life.  He is horrified by what he has created and flees but is confronted by the creature years later.

Adapted from the novel by Nick Dear, a production of ‘Frankenstein’ was a huge hit for the National Theatre in London in 2011.  Taking incidents from the original novel and also from the famous films and embellishing them with his own ideas, Nick Dear created an exciting and thought-provoking play.  Although played in period, this treatment of the story made us question how we react to people with severe disabilities in our supposedly enlightened times.

The production was directed by Danny Boyle with a cast including Benedict Cumberbatch and Jonny Lee Miller.  The two lead actors alternated the roles of Victor Frankenstein and the Creature.

The scenic design by Mark Tildesley was spectacular, using the vast open thrust stage and the revolve in the Olivier extremely well. There was an eye-popping lighting design by Bruno Poet that used hundreds of pendant lights above the stage and auditorium to give an amazing atmosphere to the production.

Nick Dear’s adaptation by the Ensemble Theatre in Sydney toured their production of ‘Frankenstein’ to the Street Theatre here in Canberra in 2013.  I gave it a rave review at the time.  It was very interesting to see the original from the National Theatre which had been produced on a much more elaborate scale.  The play was no less powerful in the Ensemble Theatre’s smaller scale production.

This was theatre that really delivered.

‘Theatre of Power’, a regular podcast on Canberra’s performing arts scene with Len Power, can be heard on Spotify, ITunes and other selected platforms or at https://player.whooshkaa.com/shows/theatre-of-power.
Posted by Canberra Critics Circle at 2:31 PM