RESCUING THE GRAND DAMES OF THE ARTS

IN a seemingly endless era of rapid development and demolition, Australia’s theatres are often the first buildings to go under the sledgehammer, and the tradition continues until now.

They were the Grand Dames of the Arts – theatres that opened their stages to give birth and nurture and care for the arts. They inspired generations through their entertainments. Dance, music and drama flourished and audiences flocked to witness productions that would define Australian culture.

I remember as a young child in my home town, climbing the outside stairs to the Gods of Adelaide’s Theatre Royal, nestled between crowded buildings in Adelaide’s West End. On its stage, Britain’s greatest actors and actresses performed in Laurence Olivier’s touring company. In Hobart, Olivier was able to save the city’s ornate Theatre Royal from demolition, but sadly his pleas fell on the philistine deaf ears of Adelaide’s city fathers, and in 1961 the old theatre, constructed in 1868, was demolished to make way for a department store’s parking station. 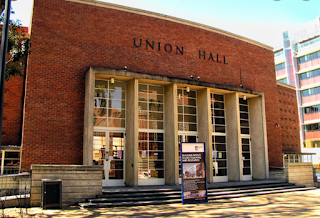 Then came the Union Hall in the grounds of Adelaide University, renowned for premiering Patrick White’s plays under the direction of John Tasker, director of South Australia’s first professional theatre company. No sooner had Adelaide’s arts community secured a heritage listing on the hall than the then Minister for the Environment and Conservation removed the listing from the State Heritage Register and the developers moved in. it was demolished in 2010 to make way for a spanking new science precinct.

Meanwhile, what fate will befall Adelaide’s Queen’s Theatre? Tucked away in the corner of Playhouse Lane, it is the oldest surviving purpose built theatre in Australia? Built in 1840, the Queen’s Theatre is today a hollow shell of empty rooms that are converted into theatre spaces during the Adelaide Festival of Arts and Fringe Festival. Will it eventually escape demolition and be restored to a working theatre behind its nineteenth century façade?

But times change and governments around the nation may look with envy upon this week’s unveiling of Adelaide’s reformed Her Majesty’s Theatre. Perhaps past acts of cultural vandalism have been relegated to history.

In 2018, the bulldozers moved in to flatten the interior of Her Majesty’s Theatre on Grote Street opposite Adelaide’s Central Markets, one of the original theatres of the Tivoli Circuit.  In that very same year, Adelaide had elected a new mayor, Sandy Verschoor, a former arts administrator and only the third woman to hold this position of influence since 1840 and a happier outcome resulted.

Her Majesty’s had been in need of urgent repair. Structural renovations in the 60s and 70s had done little to combat the deteriorating effects of time, so, the decision was made to create a state-of-the-art theatre that would accommodate the needs of artists and theatre workers and audiences in the 21st century. The interior would be entirely gutted and a new theatre would rise from the rubble, but in recognition of the Grand Dame’s heritage and artistic legacy, the façade would be preserved in a $66 million renovation.

The new design features two sweeping staircases in the expanded main foyer. Original Edwardian elements have been re-introduced, including a pressed metal ceiling and elegant architraves and mouldings. Other outstanding features include curved timber balcony fronts in the auditorium, foyer bars on all three levels, a larger backstage rehearsal room and a dramatic glass façade to the new west wing.

On June 23rd, Adelaide’s Slingsby Theatre will stage the play, The Tragical Life of Cheeseboy, scripted by Finegan Kruckemeyer, to herald the return of theatre to Her Majesty’s Theatre.

Canberra theatre lovers too can mourn the loss of iconic venues.

The ANU Arts Centre was demolished to pave the way for the new Kambri precinct. Not only the flexible Arts Centre was lost, to be replaced by a pokey Black Box Theatre, but also the theatre restaurant, Teatro Vivaldi, with its intimate offerings of cabaret and musical theatre performances, was sacrificed.

There is an amphitheatre gracing the banks of the creek that runs by the university where Canberra’s Lakespeare Company performed A Midsummer Night’s Dream, but for now there is no theatre to replace the Arts Centre. “They are outdated”, we hear the councils cry. The rationales for and against fly back and forth as arts communities battle to preserve a city’s cultural heritage, while vested interests plot the demolition of yet another cultural icon.

But with negotiations underway for a new “lyric” theatre to supplement the older Canberra Theatre, the unveiling of Adelaide’s restored 1500 seat theatre may inspire a collaborative vision for a theatre that will satisfy the needs of artists and audiences alike.