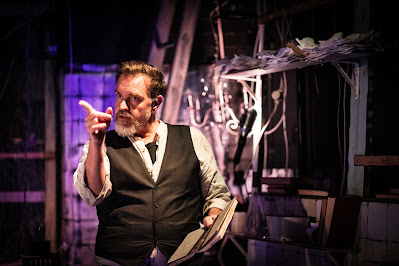 Lighting designed by James Tighe and operated by William Malan

One of the surprising outcomes of Covid-19 has been the rush by performing artists and creatives to embrace possibilities offered by new technology to retain audiences locked out of their theatres as the result of coronavirus restrictions. Some theatres and theatre companies have delved into their archives to offer free screenings of archival videos of previous productions. Television screens are awash with variety shows offering singers, dancers and musicians earnestly exhibiting their skills from their lounge-rooms, with widely varying degrees of success. Most of these performances are for free, but there are some which hopefully request payment.

The Street Theatre in Canberra has gone one step further, by offering three performances of Conor McPherson’s one-person play, St. Nicholas, produced expressly for streaming live to a paying audience. The play is performed live, in real-time, in an empty theatre, to an audience which has chosen which performance it will view in the convenience and comfort of its own home. The ninety minute play is presented with an eight minute comfort break interval mid-way.

While some might question the choice of play for this experiment, essentially a dense 90 minute monologue by an unlikeable, hopelessly jaundiced theatre critic, who mid-way through, becomes  involved with  vampires, the play none-the-less provides an excellent vehicle for director, Shelley Hicks and her actor and creatives, to explore a wide range of ideas both emotional and technical. However, sometimes, too many ideas for the good of the play.

Often very handsome to look at, and for the most part filmed in unforgiving close-up, the production is heavy on atmosphere. Imogen Keen has provided an excellent, textured setting, suggesting some sort of work shed. Unfortunately, particularly in the second act, it competes with the verbal descriptions of the environments described by the actor, leaving the audience to puzzle over the character’s whereabouts.

Throughout, the actor constantly moves through deep shadows, out of focus scenes filmed through lighted candles and swinging light bulbs, with the constant sound of heavy heart-beats in the second act, all meant to create a foreboding atmosphere. A moody guitar-based electronic soundscape, played live throughout by Den Hanrahan, punctuates almost every statement. This is interesting for a while, but ultimately irritating in its predictability, finally, inexorably slowing the pace of the production, and sapping it of any tension.

Craig Alexander is an accomplished actor, and this role as the critic, provides him with excellent opportunities to display his range. However, his performance is pitched at stage level, and filmed in close-up, as it is here, his technique is always evident, appearing as a performance rather than a character, so that the interest in this performance lies in watching his choices, rather than being absorbed in his characterisation.

Perhaps it’s more a fault of the writing than the acting, but because the critic is such an unrelentingly loathsome character, it is difficult to maintain interest in him for the duration of the play, providing a challenge for the actor, to seduce the audience into being interested in him despite his flaws. Saddled with an unreliable Irish accent, and enthusiastic technical experimentation, Alexander had an uphill battle.

No doubt other audiences will experience different nuances during the performances to come, for each streamed performance will be subtly different. The Street Theatre is to be applauded for its courage in pushing the boundaries with this fascinating experiment. While not replacing the experience of sitting in a theatre for a performance it certainly suggests there may be a viable alternative available for a new audience not able to get to a theatre.