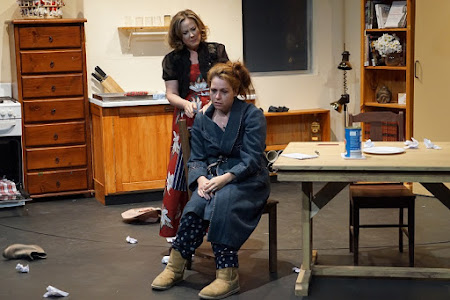 IT's a brutal play, pretending to be a domestic comedy but owing much more to the savagery of the absurdists. Yet the audience laughs.

The first belongs to Sydney ( Arran McKenna)  and Jane (Amy Dunham) , the Hopcrofts, he desperate to impress the initially off-stage guests, she obsessively chasing the tidy up and the catering. Will up market bank manager Ronald Brewster-Wright( Chris Baldock) and Marion Brewster -Wright (Tracy Noble) be impressed and useful to Sydney’s business pursuits? And what about young couple Geoffrey Jackson (Cole Hilder) and Eva Jackson (Steph Roberts)?

The next Christmas is in the Jackson’s flat kitchen and it’s a right disaster, what with Geoffrey’s ineffectual wanderings and the giant offstage dog and Eva, totally depressed and attempting suicide on a rolling basis. Neither the Brewster Wrights nor the Hopcrofts deal directly with this, although Amy does continue to clean up.

But by the final Christmas Eva’s common sense has asserted itself and she is trying to get Geoff professionally organised, the Brewster Wrights (whose kitchen this) is are descending into poverty among the trappings of plenty and it is the Hopcrofts who have eerily, strangely, won out.

The energy and bleak humour of all this is there in Jarrad West’s relentless production. Sterling performances all round, with Dunham’s housework obsessed Jane and Roberts’ turn in the middle act as the suicidal Eva at her lowest the standouts.

What’s not so evident is the time and the place. It ’s a 1970s piece and probably needs to stay there. And the nuances of English class could use more clarity, especially in the look of that final kitchen to which Marion’s snobbish remarks about the domestic arrangements of others have been leading us all along.  Sure, by then the rot has set in with the Brewster-Wrights but the grandeur should remain.

It’s not your predictably cheerful Christmas show but in the time of COVID it certainly has a suitably dismal resonance.