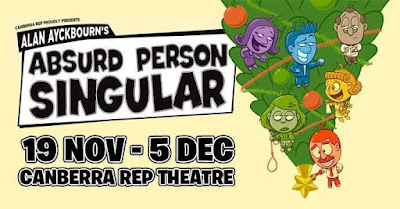 ‘Absurd Person Singular’ was playwright Alan Ayckbourn’s first dark comedy after his earlier successes, ‘Relatively Speaking’ and ‘How The Other Half Loves’.  It was a huge hit in London in 1973 and was the most successful comedy on Broadway by a British playwright since the original production of ‘Blithe Spirit’ in 1941.

Set in three different kitchens over three successive Christmases, it details the changing fortunes of three couples over those three years.  Sidney and Jane Hopcroft are desperate to move up the ladder socially and financially, Geoffrey and Eva Jackson are struggling with marital problems and Ronald and Marion Brewster-Wright are smugly well-off and disdainful of the others at the start of the play.

Alan Ayckbourn has said, ‘Comedy is tragedy interrupted’.  There’s certainly a fine line between comedy and tragedy in this play.  With issues like attempted suicide and alcoholism to be explored, it needs careful playing and direction.  The actors must play the truth in their characters and the comedy in their actions and the situations will arise naturally.  Play it for just for laughs and it can all look desperate and unfunny and, these days, potentially offensive.

Director, Jarrad West, has a high-powered, experienced cast but has opted to push the surface comic aspects at the expense of the tragic undercurrents.  As a result, there’s a lack of depth in the playing at times with a lot of shouting and eccentric physical behaviour for no clear reason.  It’s theatrical and mannered rather than naturally funny.

Happily, Chris Baldock achieves a fine, quiet study of a broken man in the third act and Steph Roberts gives a strong performance displaying her character’s highs and lows with great depth throughout the play.  Her dogged and silent determination to commit suicide in the second act is so real it becomes nervously funny all by itself.  We know we shouldn’t be laughing at her actions, but we can’t help it.  That’s how a tragi-comedy should work.

The set, comprising three different kitchens, has been designed very well by Andrew Kay.  The third act kitchen with its old appliances and colour scheme was a perfect reflection of the fading fortunes of the Brewster-Wright couple.  Neville Pye’s sound design was impressive for the rain and thunderstorm effects in the first act but the unseen growling dog, George, in the second act sounded like an angry Tyrannosaurus Rex.

There are laughs in this production but there’s more humour to be found under the surface of this play if we get to know the characters as real people displaying human failings.  The exaggerated comic types and the over-frantic playing in this production reduced its effectiveness overall.