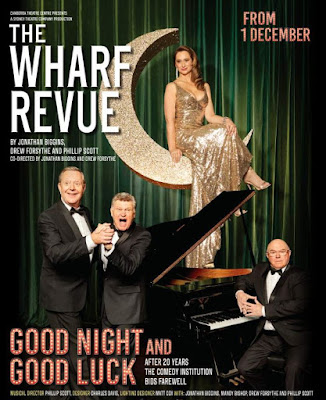 Well, it might have been a year we want to forget, but ‘The Wharf Revue’ was back in town to cheer us up with one of their best ever shows.  Fire, COVID, China, Trump, Biden and a multitude of other prominent Australian and world figures  – nothing and no-one was spared by this team.

Unlike last year, all three of the original creatives Jonathan Biggins, Drew Forsythe and Phillip Scott were back on stage this year, together with the delightful and clever Mandy Bishop.  These theatre magicians gave us a ninety minute performance packed full of goodies that felt like it was much shorter than it actually was – always a sign of a good show.

From the perceptive opening number, ‘When We Get Back to Normal’, the show skewered virtually everyone who stepped into the political spotlight this past year both here in Australia and overseas.

Part of the fun of this show is the surprise element of who and what’s on next.  Without giving away too much, the company were hilariously harmonious as the singing group, ‘The Job Seekers’, Phillip Scott sang and played the piano superbly as ‘Elton Jong’ and, later, gave us a wicked ‘K Rudd’.  Jonathan Biggins scored as Basil Fawlty dealing with quarantine guests at the Fawlty Towers hotel and as Donald Trump in ‘The Man Who Shot Liberty’.

Drew Forsythe did Pauline Hanson better than Pauline Hanson ever did in ‘The Pauline Doctrine’ and Mandy Bishop was spot on as both ‘Jacinda Ardern’ and Melania Trump.  The whole company was outstanding in the chilling and uncomfortably real ‘The Sound Of Sirens’.

This cast made it all seem effortless but every item was finely polished and presented with great skill and professionalism.  There are times where the words and lyrics were coming at you at high speed but you could hear every word clearly.

The complex projections by video designer, Todd Decker, were especially clever this year and the attractive set was designed by Charles Davis and enhanced with the atmospheric lighting design of Matt Cox.  Margaret Aston once again did an amazing job with the large number of accurately styled wigs worn by the cast.  Costume coordinator, Scott Fisher, had the cast looking exactly right for each character.

The co-direction by Jonathan Biggins and Drew Forsythe gave us a seamless, fast-moving show that never faltered.

The company are saying in their advertising that this will be the last time ‘The Wharf Revue’ will be seen.  I hope they’re kidding.