ON COURSE ON FILM 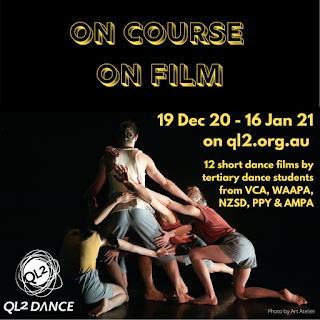 Now in its 14th year, QL2 Dance’s ‘On Course’ project is a great opportunity to observe young dance artists in development.  QL2 alumni who are currently in full time study at universities around Australia and New Zealand usually come together in Canberra at this time to choreograph, collaborate and perform new short works.

However, this year due to Covid 19 and the challenge of closed borders and changing restrictions, ‘On Course’ has been presented as ‘On Course On Film’, a festival of dance films made in Perth, Wellington NZ, Melbourne and Canberra by tertiary dance students.

They have created 12 short dance films.  For those who could not return to Canberra in time they have danced themselves or choreographed friends in their courses.  Others have created their films here and were able to work with senior Quantum Leapers.

Dance on film adds a different dimension to live dance on stage and requires a mastery of film technique and editing to be fully successful.  Because of this, and with having no choice but to film the work this year, the results are understandably uneven but would still have been a good learning experience for the choreographers.

‘Fond Illusion’ by Caspar Ilschner presented some fine, energetic, controlled dancing by the choreographer himself in the atmospheric setting of an empty car park.  The startling mirror images at the beginning were clever and inventive.  It was conceptually clear but the over-use of camera tricks as it progressed threatened to unbalance the work.

‘What Day Is It?’ was choreographed by Jett Chudleigh and focussed on the  disorientating effect of the repetition of a daily routine in the midst of lockdown, losing track of time, stuck in seemingly never-ending loops.  Again, a clear concept was presented well in dance and on film. The use of low level camera angles enhanced the work.

‘The Step Of Two’, choreographed by Christopher Wade with Liam Berg, also started with a clear concept.  It explored the classical structure of a ballet pas de deux through the lens of an all-male contemporary work, rather than a classical piece.  The filming techniques were used sparingly and enhanced the choreography.  It was danced very well by Christopher Wade, Danny Riley, Magnus Meagher and Rory Warne.  The choice of music and excellent lighting added a striking atmosphere to the work.


Nothing beats the immediacy of a live presentation on stage in a darkened theatre with an audience but this initiative ensured the annual ‘On Course’ project could take place this year.  It was great to see that QL2, the choreographers and the dancers were up to the challenge with ‘On Course On Film’.