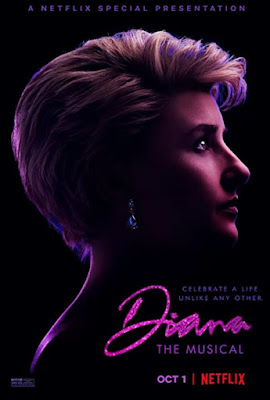 Music and lyrics by David Bryan and Joe DiPietro

‘Diana: The Musical’ covers the life of Diana, Princess of Wales from her first meeting with Prince Charles, through their marriage, divorce and her death in Paris.

The show looks good with a sumptuous scenic design by David Zinn and great costumes by William Ivey Long.  Director, Christopher Ashley, who previously guided the hit show ‘Come From Away’, has given it polish, energy and some surprising theatrical moments that work well.  It’s been filmed very professionally but without an audience due to Covid restrictions.  It would have been good to hear a live audience’s reaction to it.

The trouble with the show is the over-familiar story, the script’s tabloid approach and the condescending portrayal of the British as amusingly eccentric.  In under two hours, there isn’t time for the show to give any of the characters or incidents much depth, so it’s an unsatisfying and often inaccurate whistle-stop tour through Diana’s life.  Significantly, prolific author of romantic novels of the time, Barbara Cartland, is also a character in the musical.  Maybe intentionally, the show plays like the plot in one of her novels.

It’s also not helped by the pedestrian rock score and banal lyrics of David Bryan and Joe DiPietro, who were previously known for the score of ‘Memphis’.  We’re treated to lyrical gems like ‘I could use a prince to save me from my prince’, ‘A fecky, fecky, fecky dress’ and ‘Thriller in Manila with Camilla’.  The composers also couldn’t resist the obvious rhyme of ‘callous’ with ‘palace’.

As Diana, Jeanna de Waal gives a confident star performance.  She sings well and looks good but never for a moment convinces us as Diana.  Roe Hartrampf as Prince Charles is hamstrung with a character written as just an ineffectual, petulant clown and Erin Davie does what she can with a role that portrays Camilla Parker-Bowles as a two dimensional scheming bitch.

Judy Kaye plays Queen Elizabeth II like a cross between Oscar Wilde’s Lady Bracknell and the Queen of Hearts in ‘Alice’s Adventures In Wonderland’.  She also doubles pointlessly as a cartoonish Barbara Cartland.  There is some fine singing from the chorus but the choreography generally looks like movement just for the sake of it.

Premiering a new stage musical on a streaming service prior to its Broadway opening is an interesting and innovative approach.  Will this strategy create a ready-made and critic-proof audience for the show on stage?  Only time will tell.