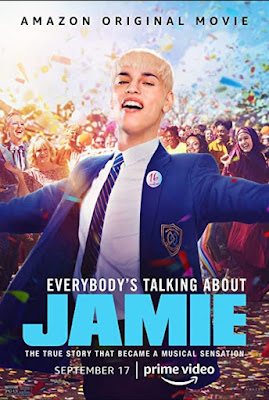 Screenplay and lyrics by Tom MacRae

‘Everybody's Talking About Jamie’ was originally a coming-of-age stage musical with book and lyrics by Tom MacRae and music by Dan Gillespie Sells.  It was inspired by the 2011 British television documentary ‘Jamie: Drag Queen at 16’.  The musical follows a 16-year-old teenager as he overcomes prejudice, beats the bullies and steps out of the darkness to become a drag queen.

An Australian touring production, which was to have included a season in Canberra, had been announced for late 2020 but was cancelled due to the Covid pandemic.

A film of the stage musical has now been released on streaming service, Amazon Prime.  The screenplay has been written by Tom MacRae, based on his book of the stage musical.  It’s been directed by Jonathan Butterell, the original stage production director, here making his feature movie directing debut.

Butterell’s film is polished, energetic, colourful and enjoyable.  Although it’s no surprise that the film has a happy, almost fairytale ending, there are some surprisingly gritty incidents throughout the film, reminding us that the journey of a young man who chooses to be different is never going to be an easy one.

Newcomer to the screen, Max Harwood, is a terrific Jamie, showing all facets of this fascinating character.  He’s charming, quirky and sensitive but has an iron will underneath.

As his mother, Sarah Lancashire, of TV’s ‘Last Tango In Halifax’, is tough but loving and supportive of Jamie’s dreams.  Her singing of ‘He’s My Boy’, towards the end of the film, is very moving.

Richard E. Grant is a stand out as a former drag queen and Jamie’s mentor.  His song, ‘This Was Me’, is one of the best and is a chilling reminder of the worst days of the HIV epidemic.  The song has been written for the film and replaces another song in the stage musical.  Frankie Goes to Hollywood frontman, Holly Johnson, joins with Richard E. Grant for this song.

There is also a fine performance by Lauren Patel as Pritti Pasha, Jamie's classmate and best friend.  She sings ‘It Means Beautiful’ with great warmth and feeling.  The rest of the supporting cast, including many young performers, give natural and believable characterisations.

The musical numbers have been staged with flair and imagination, often employing digital tricks that really work well.  The music by Dan Gillespie Sells is catchy and appealing with several songs remaining in the mind afterwards.

‘Everybody’s Talking About Jamie’ is a memorable movie musical with a message.  Stay watching through the credits at the end of the movie for a look at the real Jamie and his mother.

Posted by Canberra Critics Circle at 8:19 AM