'RUTHLESS!' AND 'THE BAD SEED' 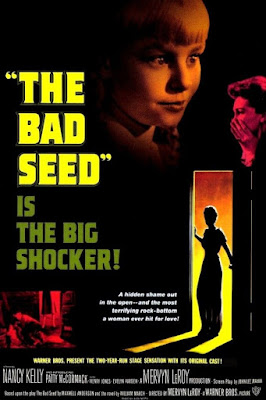 The Q Theatre in Queanbeyan recently announced their February 2022 musical production will be the off-Broadway show, ‘Ruthless!’  This 1992 musical with music by Marvin Laird and book and lyrics by Joel Paley has a zany plot that spoofs Broadway musicals like ‘Gypsy’ and ‘Mame’, as well as movies such as ‘All About Eve’ and ‘The Bad Seed’.

‘Gypsy’, ‘Mame’ and ‘All About Eve’ are well-known, but ‘The Bad Seed’, which is the inspiration for Act One of ‘Ruthless!’, would mainly be known to audiences of a certain age.

Produced on Broadway in 1955, ‘The Bad Seed’ was a play adapted by Maxwell Anderson from the 1954 novel by William March.  The play, a psychological thriller about a mother, Christine Penmark, who realizes that her young daughter is a ruthless killer, starred Nancy Kelly as the mother, Christine, and Patty McCormack as the daughter, Rhoda.

Both actresses repeated their roles in a film adaptation of the play.  The film was one of the bigger hits of 1956 and both Nancy Kelly and Patty McCormack received Academy Award nominations for their roles.

Although the novel and play conclude with Christine dying and Rhoda surviving, the Motion Picture Production Code of the time did not allow for ‘crime to pay’.  Changes had to be made to appease the censors and Warner Bros., who produced the film, added an ‘adults only’ tag to the film's advertising.

Viewed today, it’s hard to believe that 1950s audiences flocked to see this ‘shocker’.  The homicidal child, Rhoda, is played so sickeningly sweet you’d have to know she was up to something and Nancy Kelly chews the scenery as the distraught mother.  It feels like both actresses are trying to project their voices to the back of a theatre.

Several of the supporting cast play their roles as if they are still in the theatre, too.  It’s this over the top theatricality as well as the melodramatic subject matter that makes this film much sought after these days as a camp classic.

At the end of the movie, the cast take bows as if they really had just completed a stage performance.  To lighten the mood, there is a jokey finish to the curtain call that has to be seen to be believed.

Patty McCormack has continued to act in films and television.  She played Pat Nixon in the 2008 film ‘Frost/Nixon’.

A Blu-ray copy of the film is available for purchase online.  It can also be rented on various streaming services.  If you can borrow the 2004 DVD copy from someone, it includes a very entertaining commentary by female impersonator, Charles Busch, with the grown up Patty McCormack.

Try to catch ‘The Bad Seed’ before you see ‘Ruthless!’ at the Q.  Knowing the references to the film will add to your enjoyment of the musical.

‘Ruthless!’ is scheduled to play at the Q Theatre in Queanbeyan from 24 February to 12 March.

Posted by Canberra Critics Circle at 8:15 AM