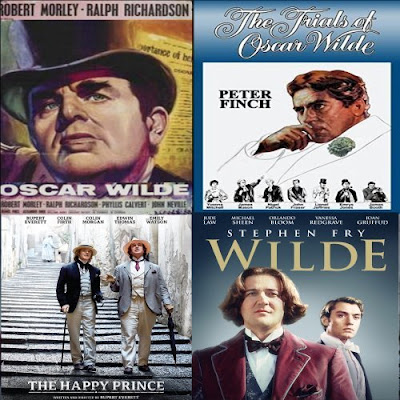 Oscar Wilde was an Irish poet and playwright.  After writing in different forms throughout the 1880s, he became one of the most popular playwrights in London in the early 1890s. He is best remembered for his epigrams and plays, ‘Lady Windermere’s Fan’, ‘A Woman Of No Importance’, ‘An Ideal Husband’ and ‘The Importance of Being Earnest’, his novel ‘The Picture of Dorian Gray’ and the circumstances of his criminal conviction for gross indecency, imprisonment, and early death at age 46.

There are four biographical movies about Oscar Wilde and all are currently available for viewing on streaming services.

In 1960, Robert Morley starred in the film, ‘Oscar Wilde’.  Morley had previously played Wilde on stage from 1936, first in London and then on Broadway.  It proved to be a career-making role for him.  The depth of his characterization in the film clearly owed a great deal to his experience of playing the character so many times on stage.  He is especially moving in the courtroom scene where he crumbles under questioning by the lawyer for the defence, played by Ralph Richardson.

Also released in 1960 a week after the Robert Morley version, was another film about Oscar Wilde, this time starring Peter Finch.  Known as ‘The Trials Of Oscar Wilde’ or ‘The Man With The Green Carnation’, this wide screen, colour production boasts an excellent performance by Finch, who seemed a surprise choice to play Wilde.  Finch went on to win the BAFTA Award for Best Actor in a Leading Role for his performance.

In 1997, Stephen Fry starred as Oscar in ‘Wilde’.  The screenplay by Julian Mitchell was based on the Pulitzer Prize-winning 1987 biography of Oscar Wilde by Richard Ellmann.  The film was more forthright about the homosexual aspects of the story than the earlier films could be and Stephen Fry gave a strong performance that was generally praised by the critics.  It was no surprise that Fry could deliver the famous epigrams with skill and humour but his performance of the dramatic scenes later in the film showing Wilde’s decline were impressively touching.

‘The Happy Prince’ is a 2018 biographical film about Oscar Wilde, written and directed by and starring Rupert Everett in his directorial debut.  The film's title alludes to the children's story by Oscar Wilde, ‘The Happy Prince and Other Tales’, which Wilde would read aloud to his children.

The film focusses on the remainder of Wilde’s life following his trial and imprisonment in London.  Now ill and exiled in France, he is denied contact with his children and is ultimately abandoned to poverty by his lover, Lord Alfred Douglas.  Rupert Everett gives a fine performance as the tormented Wilde.  He was nominated for many awards and won several.  Colin Firth, Colin Morgan and Emily Watson give strong performances in the film as well.

Both ‘Oscar Wilde’ with Robert Morley and ‘The Trials of Oscar Wilde’ with Peter Finch can be viewed free on YouTube.  ‘Wilde’ with Stephen Fry is currently available for streaming on Amazon Prime and Rupert Everett’s ‘The Happy Prince’ is showing on SBS On Demand.

This is a rare opportunity to compare the performances of this fascinating character by the four actors in these fine films.

Posted by Canberra Critics Circle at 8:11 AM