QL2 DANCE - ON COURSE ON FILM 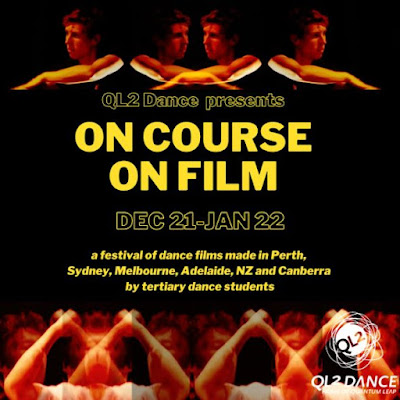 QL2 Dance’s annual ‘On Course’ project has always been a great opportunity to observe young dance artists in development.  Alumni who are currently in full time study at universities around Australia and New Zealand usually come together in Canberra at this time to choreograph, collaborate and perform new short works.

However, again this year due to Covid, ‘On Course’ has been presented as ‘On Course On Film’, a festival of dance films made in Perth, Sydney, Melbourne, Adelaide, NZ and Canberra by tertiary dance students.  They have created 7 short dance films this year.

The standout performance this year was ‘Polarity (People Are Tricky)’.  It was directed and choreographed by Christopher Wade and danced by Wade, Rachelle Silsby and Liam Berg.  With well-chosen background scenes in Sydney, the concept was clearly realized through the choreography.  It was attractively and skilfully performed by all three dancers.  Dance was quite rightly the dominant feature here but it was also skilfully filmed and edited with a good eye to location and background.  The choice of music was also excellent.

Gabriel Sinclair’s ‘Self Portrait’ had a strong second half where the dance and emotion of the piece came through strongly.

There was little to inspire or enjoy in the other films.  Too much emphasis was given to filmic tricks at the expense of dance.  The stated concepts for the films were not evident in the finished product and, in many cases, there was no actual dance to enjoy.

I understand that making film is not usually the choreographer’s main focus and that current circumstances have made it the only option to showcase their work this year.  Hopefully, ‘On Course’ can get back to normal next year so that we can see and judge the choreographic works live.

‘On Course On Film’ is accessible free via live streaming until 31 January 2022.  Details and tickets are available through QL2’s website.

Posted by Canberra Critics Circle at 8:04 AM