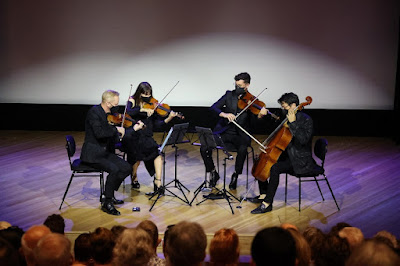 ANGELINA Zucco, chief executive of the Australian String Quartet remarks that ‘Music affords us the opportunity to travel beyond the here and now’ – a very welcome transportation in these times when physical travel seems fraught – but music also connects us in the present.

Sunday’s Australian String Quartet performance reaffirmed the collective joy of sharing live music in the same space. What a great pleasure to witness the focus and intelligence with which Dale Barltrop, Francesca Hiew, Christopher Cartlidge and Michael Dahlenburg interpreted the program of Benjamin Britten’s Three Divertimenti, David Paterson’s String Quartet No. 1 and Beethoven’s String Quartet No. 9 in C major. The absence of Interval in the 70-minute concert was also a welcome decision, intensifying the experience of total immersion in the music.

While Benjamin Britten’s Three Divertimenti were dismissed as trite at their debut performance in 1933, from this distance it is possible to enjoy the effervescent music as the youthful expression of a curious and playful musical mind. The opening movement, a most unconventional March with strident chords, disrupted rhythmic pulse and non-linear melody, leapt into life in the hands of the musicians, followed by a dramatically contrasting, lyrical Waltz.

Opening with soft pizzicato, a delicious exchange between Violins, Viola and Cello unfolded, with a particularly rich interlude in the bass register of the cello. The final Burlesque began with a rhythmic resonance of Brahms Hungarian dances, developing into sounds evoking a game with thematic fragments tossed light-heartedly back and forth between the instruments.

David Paterson has had a long association with the ASQ and it is fitting that his first String Quartet has been composed for the ensemble. The commissioned work was introduced as a mischievous and joyful celebratory piece, and it certainly led the musicians through a merry array of thematic material.

Cartlidge began the opening Allegro on viola, followed by a cello chord from Dahlenburg and the movement expanded into a modal romp secured with tight rhythmic semi-quaver motifs. The second movement, Adagio Tranquillo, in waltz time, swept along with harmonious unison violin passages and a melody wafting nostalgic fragments reminiscent of Roses of Picardy and September in the Rain. A short Toccata with busy humming strings was followed by the vigorous Fugue and Finale, beginning with soft pizzicato leading into a sweet cello melody, intersected by a fanfare, followed by a romping passage and soaring viola cadenza slipping into a fruity jig to resolve with the opening motif of the First Subject from the opening movement of the work.

With the first, perfect, pianissimo chord of the Beethoven Introduzione, it was clear that the ASQ was going to deliver a brilliant performance – and so it did. Nowhere could the Principal Violin be more exposed than the early lines in this first movement, but in his interpretation Barltrop navigated the line between tenderness and definition with confidence. The shared musicianship of the ensemble was notable in the particularly graceful cadences – precisely and delicately articulated and not a hint of schmaltz. The lovely pizzicato opening on cello in the Andante con moto quasi allegretto created the underpinning ‘footsteps’ described in Dahlenburg’s introduction, evoking the image of Beethoven pacing back and forth, contemplating his future as his hearing failed. Over this the upper strings alternated light and dark themes, emphasising the rhythmic spring and lift in the restrained 6/8 tempo. The Menuetto continued with mellow, cascading ascending and descending passages, building in intensity to the final Allegro molto, a splendidly ferocious fugue proclaiming Beethoven’s resolution to the world: ‘I will not give in!’

What an appropriate message to proclaim as we return to auditoriums after two years of the pandemic.