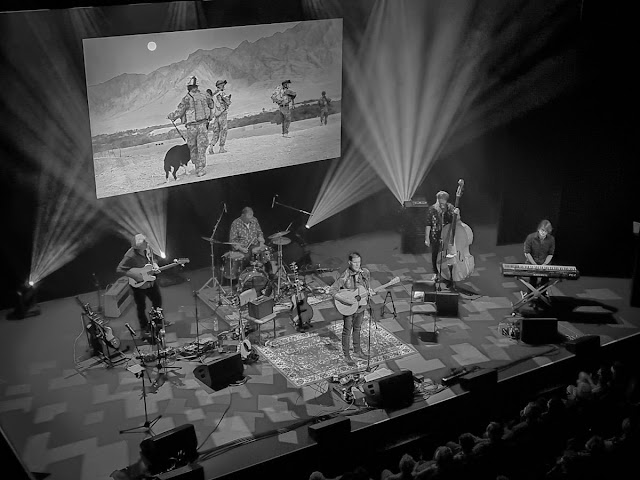 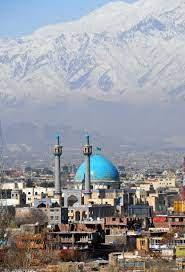 Ah! How beautiful is Kabul

Encircled by her arid mountains

One could not count the moons

That shimmer on her roofs

And the thousand splendid suns

That hide behind her walls

Projected onto a screen above the stage of the Canberra Theatre’s Playhouse the poem by 17th century poet Saib-e-Tarizi  paints an harmonious and beautiful picture of Afghanistan’s capital before the Russian invasion, before the 1996 occupation by the repressive  Taliban regime, before the American and allied invasion and before the unopposed return of the Taliban. Saib’s song of praise to his homeland turns to  songs of grief and lament in songwriter Fred Smith’s charity concert to welcome to Canberra  Afghanistan refugees after their terrifying evacuation from  Kabul airport in August 2021. Supported by soul soaring vocalist Kim Yang and perfectly attuned band members Dave O’Neill on guitar and violin, Mitch Preston on drums, Matt Nightingale on Double Bass and Hayden Kinsmen on piano Smith sings songs from his album Dust of Uruzgan throughout the first half of the concert and then introduces original new songs, inspired by his recent deployments to Afghanistan as a diplomat and his experiences at Kabul airport during the chaos that ensued after the Taliban’s return.

Let there be no doubt about it. Fred Smith is an Australian national treasure. Diplomat, philosopher, poet and raconteur his songs reverberate with the prophetic voice of humanity.    Smith’s songs of experience echo the poetry of Bertolt Brecht and the music of Kurt Weill. Politics and social justice combine not as harsh didactic judgements but as the profound voice of empathy. Smith’s songs take us on a roller-coaster ride of turbulent emotions. We are gripped by the cruel suffering of a courteous, hospitable and humour loving people, celebrated by his joyous song Live Like An Afghan. We are  distraught at the deaths of young Sappers barely turned adults, Accompanying images  of soldiers at war and human suffering sear the mind and blazon upon the heart of an audience gripped by Smith’s powerful narrative and the driving lyrics of his songs. Smith’s charity concert is a moving awakening of the danger, the fear, the perils and the futility of war, played out by politicians, determined by commanders and lived by innocent victims of man’s inhumanity to men, women and children.

But the laconic Smith, dealing in wry irony does not allow his audience to wallow in indulgence. The social and political conscience of his tribe, Smith is also the consummate showman. He closes the first half of the programme with a flippant singalong version of Niet Swaffallan op di Dixi , a cheeky swipe at a strange Dutch tradition that only men can participate in. An audience that only minutes before had been listening grim-faced to Sapper’s Lullaby  in memory of Darren Smith and Jacob Moerland, killed by explosive devices while on combat duty were now laughing uproariously and singing along. Smith’s song palette paints life’s diverse tapestry in all its colours, sad, funny, haunting and irreverent. Listening to this master storyteller in song and anecdote I am aware that we are one humanity travelling through the canyon of life’s experiences.

Smith opens the second half with an original song, Covid 19 Blues, describing his six stints in isolation and towards the close of the show reflects on the inevitability of human conflict with Sparrows of Kabul,  a wry poem of resignation.   Finally in an encore, Smith’s unequivocal song of condemnation, accompanied by images of familiar antagonistic talk back shock jocks and an angry redheaded politician, we are left to ponder  Afghanistan’s cruel and unjust fate.  Anger swells, pathos erupts, compassion collides and the minstrel of the nation’s conscience carries us along the roller-coaster ride of emotions and towards the height of understanding.

At the beginning of this celebration of freedom for the 131 evacuees in Canberra and the 4,100 who Australia helped to escape Kabul airport MC Virginia Haussegger eloquently articulated the hope  that the evacuees could have in their new found home. All in all the total number that the international community got out was 125,000. Australia flew 4100 of those out, and of them, 3300 came to Australia.  Others went to N.Z, U.K., etc. We are reminded, however, in Smith’s acknowledgement of Watan, or Homeland , an Afghan song in the Dan song that segues into Smith's song Trembling Sky, sung so hauntingly by Kim Yang and Smith on guitar that like refugees before them the Afghanistan evacuees who are making Canberra their home are exiles pining for their own land and it is our responsibility to make them welcome and help them.

Virginia Haussegger, in her concluding remarks, announces that the concert had raised $18,000 which was rounded up to $20,000 by a donation from the Canberra Centre. In the foyer volunteers from Red Cross and Rotary collected a further $4,800 as the audience left the theatre and further donations can be made to the Rotary Club at  make a donation | Rotary Club of Canberra Burley Griffin (rccbg.org). All money will go towards the education of the young refugees, support for housing and swimming lessons for the young girls. If you are reading this review of an extraordinary, wonderful and heart-uplifting concert then I urge you to welcome these new citizens by donating to the Red Cross and Rotary. Cherish your freedom and help these Afghanistan refugees to find theirs in their new Australian home.

I echo Virginia Haussegger’s remarks that this concert must tour. It should be supported to tour every capital and festival throughout the land.. Hopefully Fred Smith and his support musicians and vocalist have taught us that the price of compassion is the cost of action that can add new patterns to the nation’s multicultural tapestry. This is Smith’s gift to our welcoming spirit.