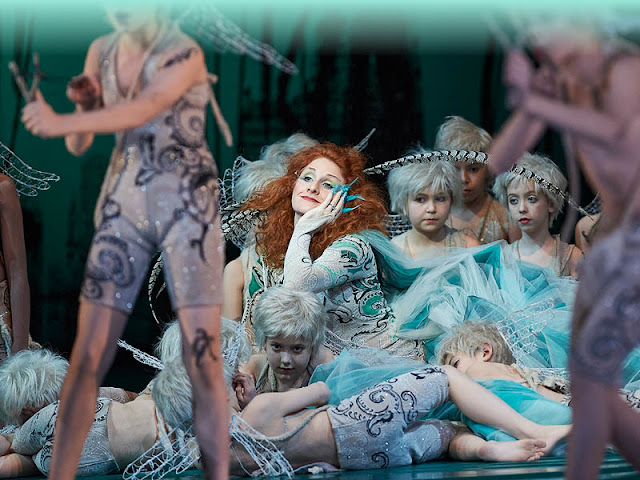 A Midsummer Night’s Dream An Opera in Three Acts

There is no need to forgive Puck(Mark Coles Smith ) for any offence that his shadows may have given in Benjamin Britten’s and Peter Tears’ luminescent adaptation of Shakespeare’s mystical magical comedy.  We are only too eager to give this elegant production of Britten’s A Midsummer Night’s Dream our friendly hands. From the opening chorus by the fairies of the ASO’s YOUNG ADELAIDE VOICES with their cupid wings and pure enraptured song we are seduced into Shakespeare’s dreamscape, Benjamin Britten’s incandescent composition and Neil Armfield’s theatrical imagination.

The seduction is all around – in designer Dale Ferguson’s cascading backdrop of green material, painted with trees and a billowing canopy hovering above the stage and rising and falling like a sea of green. There is the hypnotic sway of the suspended platform on which Oberon (Aryeh Nussbaum Cohen ) stands holding domain over his otherworldly fairy kingdom. Casting a countertenor in the role of Oberon adds to the seduction as we are lured into an alternative world, where the sprites and spirits dwell in the realm of dreams. Shakespeare’s revelatory insight into the human condition is echoed in Britten’s diverse and surprising orchestration. Under the exciting baton of conductor Paul Kildea the Adelaide Symphony Orchestra infuses the opera with the vitality, panache and sheer bravura and changing moods of Britten’s composition. As an opera, Shakespeare’s comedy is transformed to reveal the foibles, desires, ambitions and struggles of the human condition. The glorious voices of the singers lend credence to Oberon’s mysterious power, Tytania’s assertive dominance, subjected to Oberon’s devious will, the lovers’ confusion blinded by Puck’s mistakes and love’s incongruity, and the simple, likeable foolishness of the Mechanicals and their play within the play. Britten’s genius lies in his ability to subtly sway our senses with his arrangements. His orchestral ingenuity conjures the fairy world and the lover’s desperate plight in their confusion, the eroticism of desire and the hilarity of Bottom’s posturing and the art of coarse acting in the tale of Pyramus and Thisbe. Britten’s composition is not only remarkable for its musical imagination, but also for its power of emotive persuasion. It is again the essence of the seductive nature of this adaptation.

Above all, Armfield’s production which has had performances in America and Europe salutes the art of collaboration. Britten has pared back the play to highlight the narrative, the battle between Oberon and Tytania (Rachelle Durkin) over the stolen changeling boy, the lovers’ dilemma at the hands of Puck the mischief maker, and at the same time the hilarity we feel as Helena (Leanne Kenneally) and Hermia (Sally-Anne Russell) and Lysander (Andrew Goodwin) and Demetrius (James Clayton) fall victims to their own innocence and emotions. At the same time, Britten and Armfield ensure that we view them with a certain amused empathy. Composer, director and conductor work in harmony to reveal Shakespeare’s phenomenal wisdom and humanity.

Clarity and character are at the very heart of this uncluttered and illuminating production. Not only is the singing superb, but the acting is highly commendable from Cohen’s Oberon and Durkin’s Tytania, the four lovers and the simple rustics and most notably Warwick Fyfe as Shakepeare’s clown. There is strong support from Teddy Tahu Rhodes as Theseus and Fiona Campbell as Hippolyta The story’s the thing, free of the opening expository scene and much text that does not advance the plot.  Britten’s A Midsummer Nights Dream simply tells a good story, while losing none of the magic of Shakespeare’s text. Armfield’s theatrical invention is seen in his business and sweeping use of the large stage and Ferguson’s fluid setting, including, contrary to the advice of WC Fields, a dog on stage, providing the fairies with slingshots to protect their queen, staging fight director Nino Pilla’s battle between the lovers and presenting a truly funny parody on amateur acting in the play within the play. Armfield’s  theatrical sensitivity permeates the production, complementing the musical themes, infusing the singers with clear and expressive action and imbuing the production with Shakespeare’s magic.  Coles Smith’s lithe and nimble Puck is a speaking role, played with energetic fun-filled panache and athleticism.

In the recent tradition of Festival opera offerings, Benjamin Britten’s A Midsummer Night’s Dream is a joyous successor to Barrie Kosky’s productions of Handel’s Saul and Mozart’s The Magic Flute and Armfield and Brett Dean’s  Hamlet. Seductive and magical it delights and enchants capable of raising the spirits of groundlings and inspiring devotees of opera and the works of Shakespeare.  This dream lingers long after you awaken from its charm.

Posted by Canberra Critics Circle at 9:16 AM