Kate Mulvaney’s version of Ruth Park’s immortal novel Playing Beatie Bow is more than a mere adaptation for the stage. It is an inspired retelling of the story of Abigail Kirk (Catherine Van Davies), drawn back to the Rocks of 1873 by “the furry elf” Beatie Bow Sofia Nolan).Under the powerfully imaginative direction of Sydney Theatre Company Artistic Director Kip Williams and performed by an outstanding STC cast, Mulvaney’s vibrant and highly theatrical adaptation not only captures the magical spirit of Park’s two very different worlds, 150 years apart, but also highlights the lessons to be learnt from our understanding of life in 1873 and 2021 when this adaptation is set. By updating Abigail’s time to the present, Mulvaney breathes fresh insight into the themes of Park’s novel of the 1940s, while underlying the universality of the human condition in her observations of the power of love, the binding spirit of family, the importance of education for all, including  young girls like Beatie and all women.  Park’s  strong feminist principle asserts the inherent bond between mother and daughter and the endowment of the gift of foretelling passed down from generation to generation, manifest only in the female of the line. In Park’s novel it is held by Granny Alice Tallikser in another riveting performance by Heather Mitchell. And it is the gift bestowed upon the fearful young Beatie Bow (Sofia Nolan). Both Abigail and Beatie cry out for their mothers. It is a bond more powerful than life itself. Abigail, thrust into another time desperately struggles to be reunited with her mother Kathy, played by Lena Cruz, before she is about to leave for Norway with Abigail’s father, Weyland (Tony Cogin). Beatie desperately longs for her dead mother and assumes an unbearable guilt  for believeing that she has caused her mother’s death. Through it all, Park’s women engage in a search for identity, purpose and worth. 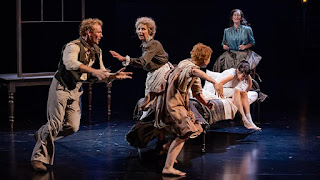 In the newly refurbished Wharf Theatre near the Rocks where Park’s novel takes place, director Kip Williams once again demonstrates his remarkable mastery of conjuring a world upon an open stage. Simple set items  - a lamppost, window frames, a table and chairs, washing lines, a barrel or a sweeping expanse of cloth create the houses, shops, ships and the various locations, past and present of this utterly absorbing production.

Mulvaney and Williams with the aid of a magnificent team of creatives bring to life not only Park’s fascinating characters, but a story that transports the audience to another world of time, travel, spell and mystery, hopes and dreams and that greatest of human gifts, love.

Williams’s superb ensemble embrace Mulvaney’s adaptation with relish. Every performance brings Ruth Park’s characters to life with astounding clarity,although the family’s Scottish accents from the Orkneys may take some tuning into.. Heather Mitchell’s spaewife Granny, with the burden of the gift, gives yet another flawless performance and she is brilliantly supported by an ensemble that takes on a multiple of roles and creates a world of characters caught in time and fashioned by Park’s fantasy and Mulvaney’s passion for Playing Beatie Bow. There are excellent performances from Len Cruz as Abigail’s Mum, Kathy, torn between her love for the estranged husband Weyland (Tony Cogin) who doubles as Mr. Bow, tormented by his wartime experiences in The Crimean War. Claire Lovering offers a moving and sensitive performance as the devoted Dovey. Ryan O’Keefe’s  Judah is perfect as the romantic interest and Ryan Yeates shows enormous promise in the roles of the hypochondriacal Gibbe and young 21st century youth, Vinnie. Guy Simon gives a touching performance as Johnny Whites, the launderer whose three daughters have been taken from him and placed in an asylum for destitute children after the death of their mother. Whites’  suffered injustice resonates with heartbreaking reminiscence of the Stolen Generation. 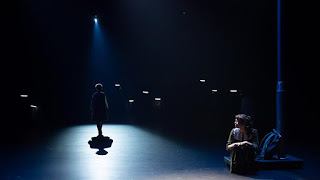 As the central characters in an ensemble of wonderful actors Catherine Van Davies as Abigail Kirk and Sofia Nolan as the eponymous Beatie Bow lead us through far more than Ruth Park’s story of a young, unhappy girl whose journey through time leads her to learn the power of self-determination, true love and family. Van Davies charts the journey of self-discovery with emotional awakening and awareness. Nolan’s feisty Beatie Bow charts her difficult journey from a spiteful, resentful and fearful elevn year old to a young girl wishing to better herself through an education denied most young women of her time. It is here that the seeds of feminism are sown and conjoin with Abigail’s quest for her own voice and self-determination.

Williams’s production sweeps me along and I am caught in its thrall. I am intrigued by Mulvaney’s  selective and theatrical creation of Park’s magical narrative. I am transported by her ingenuity and intriguing storytelling, but more so by her deep understanding of and compassion for her characters, a quality quickly identified and expressed by the actors. 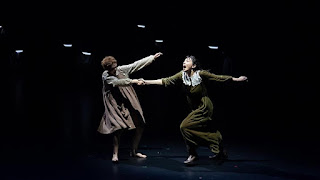 Once again, the team that brought us Mulvaney’s epic adaptation of Ruth Park’s A Harp in The South have brought us another of Ruth Parks’  works that transcends time and teaches us lessons for all time. Sydney Theatre Company’s unforgettable production of Playing Beatie Bow is not to be missed!