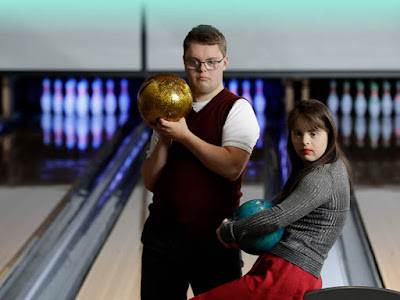 A dance performance in a bowling alley. Well, that’s a new approach.  Sport and art merge  in Restless Dance’s expression of our inherent response to success and failure. A company that includes performers with intellectual challenges responds to the limitations placed on people with differences that impede their natural ability to face the consequences of failure and learn from their achievements and their difficulties. Apparently, guard rails are inserted in the bowling alley to prevent people with physical and intellectual challenges from consistently rolling the balls into the gutter. Artistic director Michelle Ryan has choreographed a contemporary dance work that removes the guards and allows her performers to learn from failure. Winning or losing is part of life’s experience and Ryan’s Guttered challenges an audience to ask themselves whether they are willing to take risks. On entering the performance area, each audience is issued with a score card that asks “Do you consider yourself a risk taker?” – “No not at all. I play safe” or “Somewhat-depends on the competition.” or “YES! Deal with it.” The company then invite members of the audience to bowl their ball with varying degrees of success. Life’s metaphor becomes the playground of risk, the bowling alley of success or failure.

Guttered  is played out as a series of movement vignettes and the bowling lanes a rite of passage where young men compete for the affection of the girl or two young men explore their attraction for each other. A lane becomes a playground where difference is mocked and bullies play out their cruel game. A remote controlled and illuminated bowling ball performs a sensitive and affectionate pas de deux with a girl who  discovers her life passion in the company of a bowling ball. A clever video projection of himself upon another young dancer’s singlet allows him to be true to himself, unimpeded by the judgement of others or the external world. Here he has the power to find his true identity. But Guttered is not just about finding oneself. It is about the frustration of failure, the right to take risks and the lessons to learn from life’s disappointments. Jason Sweeney’s music soundscape runs the gamut of emotions, illuminated by Geoff Cobham’s iridescent design. The tapestry of life is played out in the lanes, at the pins and along the gutters. The final image is of a bowler, standing at the beginning of the lane, having rolled gutter ball after gutter ball. Life is not a succession of strikes, but the gutter balls of experience are also the epiphanies of life’s journey.

Ryan has choreographed a series of movements that allow jubilation to co-exist with despondency, all part of the bowling game of Life. There are moments of tenderness, of rivalry and of companionship. But above all there are moments of self-realization and the determination to take the risk. Ryan’s ingenious decision to place the performance in a bowling alley has provided a fitting backdrop for the themes, but may have limited the effectiveness of the dance. The metaphor is played out with effect, but the architecture of the bowling alley confines the freedom to embrace the space. Guttered is a clever invention with important themes that entertains and instructs in its unusual surrounding but resonates more as performance movement than dance. It is a commendable experiment , a risk taken  even though it missed the Strike.