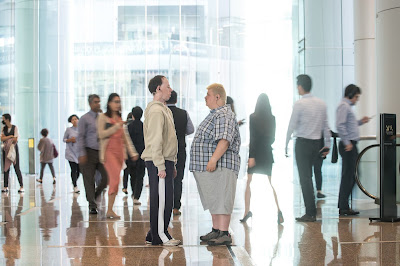 It’s a balmy Sunday afternoon at Adelaide’s popular and historic beachside suburb oif Glenelg. In Moseley Square, young children squeal as they leap through the water fountains that spurt from the ground. Pedestrians criss-cross the square and people sit at tables at the cafes and restaurants that flank the square. At the beach end raised seating blocks the view of the memorial to the city’s founding fathers and the jetty and sandy beach by the sea. Headphones rest on the backs of the socially distanced seats until audience members place them on their ears to hear the music. The music fades and a conversation begins between two men.  It is ordinary at first as eyes scan the square to find two men talking to each other through microphones some distance away. The older man talks to the younger down syndrome mate about the love for his family, his wife and  and videos. The younger man, Steve, expresses his desire to find a girlfriend. His mate, Gary, offers to help as they come closer to the audience and more fully into view.

This is the familiar theatrical device employed by Back to Back Theatre.  I first saw the company at the Flinders Street Station in Melbourne during a festival. Since then the company with its idiosyncratic theatrical style has toured the world, transforming public places into a backdrop for their performance. It offers a challenge to performers and audience alike, as well as bemused and amused passersby. Their theatre rings with authenticity. Two people carry out an everyday conversation in the midst of a crowd. Then the phone rings.

The dialogue turns assuming the mystery of a Pinter sketch, the language of cloaked intent, concealing subtext and arousing intrigue. Alan appears in another part of the square, He has been given Gary’s number by Darren who wants Alan to do a job for him and retrieve something from a locker. What ensues is a cat and mouse game of avoidance and distrust, a sparring contest of will against will and financial wheeling and dealing. It is the conundrum of communication pitting persuasion against resistance. Tension rises and frustration erupts in the pregnant pause.  Steve remains immobile, resisting all attempts to make him move as Gary disappears to buy coffee at a café at the edge of the square. The power play is expertly directed and the actors, amplified through the headphones create  a thoroughly believable reality. The audience is drawn inexorably into the powerplay. There is no need to know what is concealed in the locker or why it is important that it be retrieved for an awards night that will be attended by Asian visitors. The drama is not about reality of circumstance, but rather the reality of human action and reaction. In an ironic move, Alan urges psychologist Caroline to come and persuade Steve to comply. Her psychological persuasion is to no avail and when the irresistible force, Caroline, meets the immovable object, Steve, Alan and Caroline learn that the will is mightier than the word.

Back to Back tackles issues front on. The currency of communication in Small Metal Objects is not measured by expectation, but by understanding. The audience is compelled to listen and to seek out the source of the voices amongst the crowd.  It is Back to back’s gift to the audience – to see and hear things differently and comprehend.