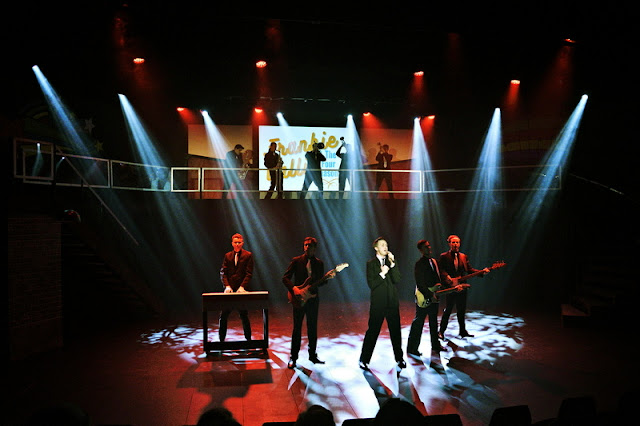 Directed by Jim McMullen - Musical Direction by Caleb Campbell
Choreographed by Madelyn White - Set Design by Ian Croker
Costumes by Jill McMullen and Chelsea de Rooy - Lighting design by Joe Cox
Sound design by James McPherson
Presented by the Canberra Philharmonic Society - Erindale Centre until 20th March 2021.
Reviewed by Bill Stephens.
“Jersey Boys” is the musicalisation of the lives of four petty criminals from New Jersey USA, who achieved world fame as Frankie Valli and the Four Seasons. Their story is told from the varying perspectives of each of the quartet in dialogue that is direct, pithy and often coarse. Packed full of the quartets hit songs; “Jersey Boys” is given a tight, taut and terrific production under the experienced and confident direction of Jim McMullen.
Central to the success of any production of “Jersey Boys” is the ability to reproduce the distinctive sounds of Frankie Valli and the Four Seasons. Philo has been able to achieve this with four outstanding singer/actors in Jared Newall, Dave Smith, Jonathan Rush and Zach Johnson who skilfully sing the songs and replicate the Four Seasons moves. They also possess the acting chops to create convincing characterisations in performances enhanced by an excellent sound design by James McPherson which incorporates a double tracking technique, the effect of which is astonishing.
Jared Newall as Frankie Valli is particularly impressive, replicating Valli’s distinctive falsetto with apparent ease while capturing a sense of Valli’s introspection despite his role fronting the group. Jonathan Rush, as hit-song writer Bob Gaudio, provides the warmth and camaraderie for the group in contrast to the brash worldliness of Tommy DeVito, brilliantly captured by Dave Smith who manages to make this brashness likeable. Zach Johnson as Nick Massi, the fourth and seemingly most amiable member of the group, surprises with his power punch explosion in the second act.
McMullen takes full advantage of Ian Croker’s excellent set design and the clever lighting design by Joe Cox to keep the show moving along at a fast pace with his large cast accomplishing the many quick scene and costume changes with flair and panache.
Sensibly he’s inflated the size of the cast to provide more on-stage opportunities by sharing the small character roles usually doubled in professional productions, thus providing John Whinfield the opportunity for a scene stealing performance as the over-enthusiastic Joe Pesci. McMullen’s also incorporated a series of bright well- executed dance routines for which chorographer Madelyn White has obviously enjoyed recreating the quirky moves of the period.
Full marks to Jill McMullen and Chelsea De Rooy for their many well-researched costumes both for the Jersey Boys and the ensemble, as well as to Musical Director Caleb Campbell and his band which added a professional gloss to an already impressive production of this sophisticated and challenging musical.
Photos by Ross Gould
This review originally published in CITY NEWS on 5th March 2021
Posted by Canberra Critics Circle at 1:14 PM