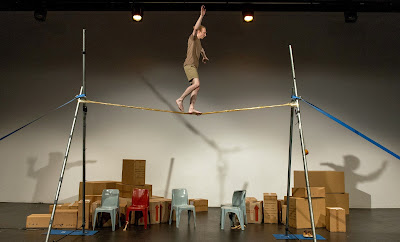 High Performance Packing Tape by Branch Nebula was scheduled to be performed during the 2020 Adelaide Festival. At the last minute the performance was cancelled after the performer, Lee Wilson,  suffered an injury while rehearsing the one hour physical theatre performance. Watching its revival and replacement performer, Timothy Ohl at the 2021 Adelaide Festival I’m not surprised.  After all, balancing on a precariously placed tower of cardboard boxes, or walking a tightrope of masking tape and falling with a collection of large balls strapped to the back or hanging naked from the duct tape by only the feet is not everybody’s idea of fun. The appeal of danger is in the anticipation, the fear that a routine may not work and bring grief to the artist. The audience sits in a state of tension, emitting occasional gasps and nervous laughter with every slip or fall or prospect of harm. It is the heightened sense of imminent danger that High Performance Packing Tape appeals to. 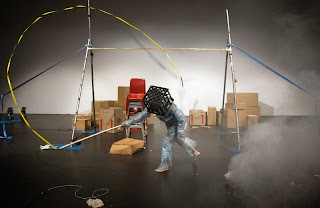 With Buster Keaton indifference, Ohl sets up each routine, testing his skill and persistence. Like Keaton and Harold Lloyd of Silent Movie fame, Ohl is proof of the old adage that if at first you don’t succeed, try try again. Tension is in the timing, judging the audience’s attention and response, knowing just when to fail and just when to succeed, just when to surprise and just when to thrill. There is no pizzazz, no flamboyant showmanship. Every attempt is seriously approached, every fall is intentionally staged, and yet risky enough to anticipate injury.

Ohl performs the final part of his risky routine naked, a sinewy being suspended at the end in a hammock of tape wound about his body, and eventually freed by a sharp Stanley knife.  Ohl’s intention may be to maintain an undemonstrative test of stamina and resolve. He would have done well to engage a theatre director to shape the show into a theatrical event as well as a display of physical skill and daring. By the time Ohl had completed his setting up of the tightrope with the fourth roll of duct tape, the tension of anticipation had dissipated. I was left admiring his persistence and the originality of his ideas but still longing for that heart-stopping timing and the sudden surprise and fright that opened the performance with the bursting of the huge balloon he is blowing up. 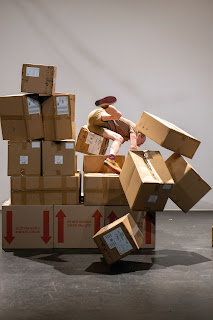 High Performance Packing Tape is an original exhibition of “Don’t try this at home” physical tests with random objects and material that one may find in an Officeworks or Bunnings store. It will appeal to anyone who enjoys the risk of the spill or the thrill of the fall.  Its impact is lost by elongated set-ups and a certain indifference towards the audience. Its appeal rests with the originality of its physical routines. High Performance Packing Tape is certainly physical. Theatre it is not. For some in the audience the danger may have been enough.  Perhaps Branch Nebula could have packaged up the physical tricks and risks in a tighter and higher theatrical performance.