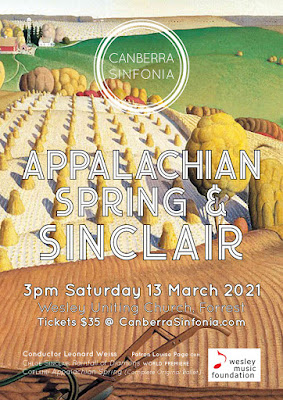 Chloe Sinclair is currently undertaking a Master of Music (Composition) under Paul Stanhope at the Sydney Conservatorium Of Music.  She has already won numerous prizes and has written pieces for several choirs.

Her composition, which was commissioned by Canberra Sinfonia, ‘Rainfall Of Diamonds’, was inspired by the idea of movement and stillness, titled for the diamond-like rain that occurs on other planets, combined with the beauty and precious nature of rain and water systems on our own planet.

This atmospheric and melodic work successfully conjured up other-worldly images of sparkling colour and beauty.  The orchestra played it with great clarity and depth, creating a soundscape that enabled the imagination to soar.

Aaron Copland’s ballet, ‘Appalachian Spring’, was first performed in 1944.  It won the Pulitzer Prize for Music and its popularity has continued ever since as an orchestral suite.  In this concert, the complete full length version for 13 instruments was played.

Set in rural Pennsylvania, the work details the everyday lives of a young American couple in this rustic setting.  The music is lyrical and romantic with a sense of the grandness of the countryside as well as day to day life.  The instantly recognizable tune ‘Simple Gifts’ is woven into the music to great effect.

The playing by the orchestra was notable for its warmth in the opening and closing passages of the work and the sudden bursts of action in the revivalist section.  There was especially pleasing and skilful work from the players of the flute (Alison Mountain), clarinet (Tim Artelaris) and bassoon, (Jordan London).  Conductor, Leonard Weiss, achieved a strong and pleasing performance from his orchestra.

Canberra Sinfonia is one of Canberra’s newest semi-professional musical ensemble, designed for and by emerging professional musicians in Canberra.  It was good to see a near capacity audience for them at the Wesley Uniting Church.  The performers fully deserved the resounding applause they were given at the end of the concert.