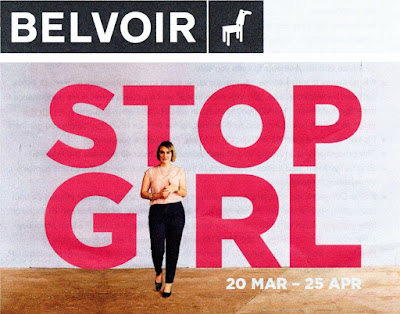 “Connecting is never a mistake”.  Coming to understand what this means for Suzie, returning home to Australia after a year reporting on the war against the Taliban in Afghanistan, is the key that unlocks this important, at times horrifying, drama.

Though the play ends with a kind of resolution for Suzie, I was taken by surprise to find how shaken I was when walking away from the theatre into the normal Sydney evening buzz.  I had, following my usual principle, deliberately not researched the writing of the play or other reviews – and felt a heightened concern for Sally Sara, clearly represented on stage by 'Suzie'.

Two other women, who have created theatre about their own lived experience – in  their cases performed by themselves – came to mind from my previous reviews.  In 2018 I saw Red by Liz Lea, a dancer who suffers from essentially untreatable endometriosis; and My Urrwai by Torres Strait Islander Ghenoa Gela, returning to her home island after growing up in Brisbane.  I wrote of their work “which seems to me to be a new original and significant form, which I’ll call Theatre of the Personal Self.”

Though Sally Sara has made her experience into a play performed by others, Suzie’s response emotionally must surely be as close to Sally’s as theirs was to Liz and Ghenoa.  They took us into their confidence through a combination of words, music and dance.

Sara’s piece is superficially a more conventional series of short realistic scenes, backed by sound effects, video and sharp lighting jumps from bright light to absolute dark.  Our feelings become those of Suzie / Sally.  We feel with her and for her, and fear that we can so easily make those kinds of mistakes ourselves.  Have we always properly respected other people, in life and in death?

There is an irony here in my being a reviewer of another person’s sense of shame, almost in parallel with her being a reporter filming, asking intrusive questions, and sending back to ABC TV her live reports on people as they are injured and killed.  Keeping her distance emotionally, choosing her shots and her words to fit the expectations and conventions of “objective” reporting is a requirement of success as a professional journalist.  And, indeed, Sally Sara is one of our most respected journalists.

It’s scary, then, as her play shows, that maintaining the proper professional approach can turn into a case of post traumatic stress disorder.  But what can a PTSD counsellor advise when she – despite having seen the Foreign Correspondent reports on TV –  could not possibly imagine the horrors of what Suzie/Sally has actually seen, and done, or not done, in Afghanistan – and in Sierra Leone, and in so many other places fraught with war and poverty?

Suzie has at least her long-term friend Bec, her assistant/translator Atal, and finally her mother to make connection with.  Watching that story play out is what makes the drama work on stage.  I’m left just hoping that Sally is OK – perhaps the writing of the play is proof of that.

But the awful feeling of despair remains in the title, spoken in his language and translated by Atal, by a father walking away from his wife because she has just borne a daughter, who is therefore worthless to him.  “Stop girl!”

Sheridan Harbridge’s tour de force performance of Sally Sara’s 'Suzie' puts that man and that culture, wherever and in whatever degree, to shame.