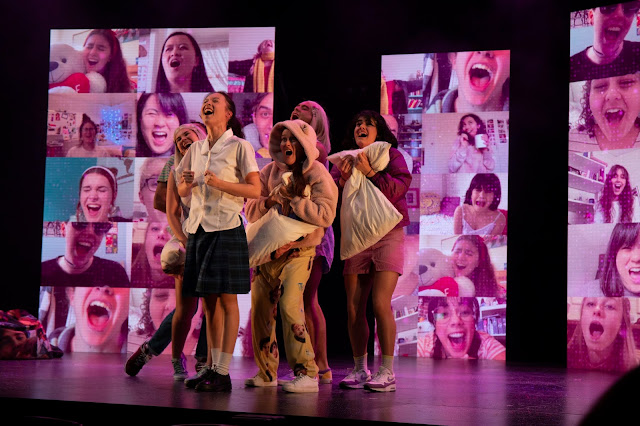 You may not have heard of Yve Blake before this show, but she’s the young Australian talent who wrote the words, music and lyrics for this show in which she recreates the world of her fourteen-year-old self with astonishing truthfulness. Director Paige Rattray has carefully crafted her work into a brilliant, wildly entertaining multi-media production which has captivated audiences around Australia. Now it is Canberra’s turn.

The show is centred on a group of school friends, all of whom are passionate fans of boyband lead singer, Harry (Aydan).  The most passionate is Edna, delightfully portrayed by Karis Oka.  Edna has decided that she and Harry were meant for each other, and spends her time regaling her besties, Saltypringl (James Magoos), Jules (Chika Ikogwe) and Brianna (Shubshri Kandiah) with her plans for a life with Harry.

When Edna’s long-suffering, well-meaning mother Caroline, (Danielle Barnes) refuses to buy her a ticket to Harry’s forthcoming concert, Edna is devastated. She devises a plan to kidnap Harry. However when Jules and Brianna discover what Edna has done, events turn sinister when Harry is almost  killed.

So what separates “Fangirls” from other similar teenage musicals concerning rock singers and teenage girls?

The brilliance of Paige Rattray’s staging is one reason. Rattray has made stunning use of a relatively simple setting of large LED screens to create a fantasy world dominated by social media.  She’s  drawn wonderful performances from her young cast, each of whom portray their characters with finely observed, tightly disciplined performances. Her staging is spare and efficient. Any necessary furniture and props are carried on and offstage by the cast, and the pace is whirlwind throughout.  She’s even subtly updated the show to include Canberra references. The sharp-eyed might recognise a St. Clare’s skirt among the costumes.

Another is the frenetic, witty choreography devised by Leonard Mickelo to support the action.  Danced with energy and precision by the ensemble cast, it captures the mood, adds spectacle while underlining critical moments. The staging of the rock concert which begins the second act is genuinely exciting.

But mainly it is the truthfulness of Blake’s writing which stays in the mind. She captures the self-absorption of the teenage mindset with captivating precision. Her dialogue is funny, her lyrics witty, and her tunes catchy. At the heart of her story however is her charming depiction of the mother/daughter relationship which is achieved without resorting to sentimentality or schmaltz. Under all the entertaining fun and razzle dazzle of the staging, it is this little take-home which makes “Fangirls” so memorable.