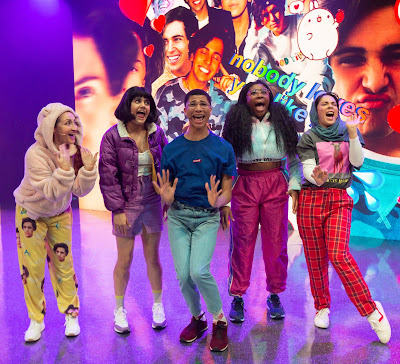 “Why?” I asked myself. Why would a company with the esteemed reputation for producing serious works stage a glossy, Dolly magazine musical fantasy about a pubescent teenager with an obsessive passion for a teenybopper pop star? The answer becomes clear as Fangirls unfolds before a packed audience at the Ridley Theatre at Adelaide’s Wayville Showgrounds.

The story of Edna (Karis Oka ) an only child of a single parent Caroline (Sharon Millerchip) is the stuff of “That’s me theatre”. Any teenage girl or woman who has been and experienced the agony of love-struck obsession will identify with girls like Edna, Brie (Shubshri Kandiah ) tormented by body image or Jules (Chika Icogwe( ) with a weight complex or Edna’s friend Saltypringl (James Majoos ), coming to terms with being gay. Gay or straight, guy or girl Fangirls will strike a chord. There is nothing new about the plights of these teenagers, nor their fears, dreams, and desires. Last century they swooned at Sinatra, melted at Presley, threw knickers at Tom Jones and screamed at the Beatles. Then came Justin Bieber and One Direction. It was ever thus.  Only the times are a changing and with it the obsession with social media and smart phones that play a central role in the characters’ lives. Everything is faster, slicker, quicker, louder and Belvoir’s production of Fangirls is a fantasy teenchick saga of an old condition in a new age.

Belvoir’s excellent cast burst with the vitality of youth to the blaring sound of Yve Blake’s pop,bebop and hiphop music under Paige Rattray’s tight direction and Leonard Mickelo’s snappy choreography. Fangirl’s highly professional production values with David Fleischer’s set, video content and costume design all serve to deck the show with today’s reality that hides the private fantasy.  So why yet another musical play about teenagers’ complex and fragile human condition? Perhaps the answer lies in Edna’s defiant  Just You Wait and See. It leads her into a drastic fantasy world, obsessed with the notion that   real life singerAYDAN’s character,pop star Harry’s hit song Nobody Loves You Like Me is being meant for her and only her.  Fangirls is more than a fairy floss candy tale of teenage angst, parental confusion, fickle friendship and rite of passage.

There is a little bit of everyone and a lot of some in this 21st century take on age old themes . Composer and librettist Blake has intertwined the dilemma of loving single Mum Caroline, struggling to help her scholarship, clever and intelligent daughter, caught in a vortex of change. Cause and consequence drive the action and the play’s moral purpose and, love it or not, it would do Fangirls an injustice to dismiss it merely as just another high school musical.

Cliches and stereotypes abound and implausibility shakes the willing suspension of disbelief. But this is life and Fangirls makes no apology for holding one of Life’s most precious mirrors up to Nature. Created with high school students in mind, Fangirls is sure to be the Bye Bye Birdie, Grease or High School Musical of the future and when amateur rights are released on many school production wish lists. And that’s no fantasy.

Fangirls will open  at the Canberra Theatre  on March 24.