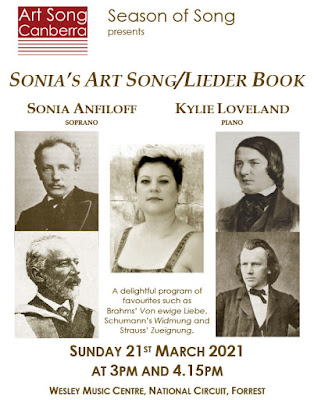 It takes a lot of courage to give a performance of songs that can trigger deep emotions related to memories, good and bad, from a singer’s past.  In her concert of a range of romantic songs, soprano Sonia Anfiloff took the audience into her confidence, explaining that a reliance on technique can often be necessary to avoid being overwhelmed in performance by the powerful emotions certain songs can generate.  This honesty resonated with her audience, adding an unexpected extra dimension to this concert.

In chronological order from 1814 to 1938, Sonia Anfiloff performed songs by Schubert, Schumann, Brahms, Tchaikovsky, Fauré and others.  Many of these songs, she explained, she had not had the opportunity to sing for various reasons during her early years of study.

The concert commenced with ‘Gretchen At Her Spinning Wheel’ by Franz Schubert.  It was an excellent choice as it gave the singer the opportunity to display the full range and power of her voice as well as her ability to convey the emotions at play under the surface of the song.  Her delicate singing of the heart-break of lost love in the final two verses was especially fine.

Moving easily from the German language to Russian, Tchaikovsky’s ‘Mignon’s Song’ showed Anfiloff’s ability to sing a highly emotional song with restraint, making it a very powerful statement of the power of love.

Amongst other highlights were the well-known ‘Serenade’ by Franz Schubert as well as ‘Dedication’ and ‘Tomorrow!’ by Richard Strauss, a composer she clearly enjoys singing.  The most outstanding performance of the concert was ‘Exquisite Hour’ by Reynaldo Hahn, a beautiful song given an interpretation of extraordinary sensitivity.

Accompanist, Kylie Loveland, gave great support throughout the concert and her playing of ‘Dedication’ by Strauss, ‘Eternal Love’ by Brahms and ‘Tomorrow!’ by Strauss were especially memorable.

The concert finished with an encore performance of the ever popular aria, ‘Caro Mio Ben’, by Giordani.  Both Sonia Anfiloff and Kylie Loveland deserved the warm and sustained applause they received from the audience.